The Following images are those used for Unit 4 of the ALRI Shakespeare's Rome course.  Click in the small images or on the links to see larger images.

Note that all dates are recalculated to the modern Gregorian calendar.

http:/www.mmdtkw.org/RomeShak200a-Shakespeare1.jpg
The fourth Shakespearean Roman play in our series is actually the first one he wrote, in the early 1590s.  It is a "revenge play" (see below) set at an indeterminate time apparently in the chaotic 3rd century AD during which the average Roman Emperor reigned less than five years -- and that includes the long reign of Diocletian who became emperor in 284 and reigned until he resigned on May 1 of 305 AD.

Diocletian was the first Roman emperor to voluntarily abdicate the position. He lived out his retirement in his palace on the Dalmatian coast, tending to his vegetable gardens. His palace went on to become the core of the modern day city of Split, Croatia.  After Diocletian's abdication, his carefully crafted "tetrarchy" -- four rulers: two "Augusti" and two "Caesars" -- fell apart, and his heirs fought until Constantine took the western half of the empire from Maxentius in 312 AD and the eastern half from Licinius and his allies in 325 AD.  For information on Diocletian and Constantine, see http://en.wikipedia.org/wiki/Diocletian and http://en.wikipedia.org/wiki/Constantine_I. 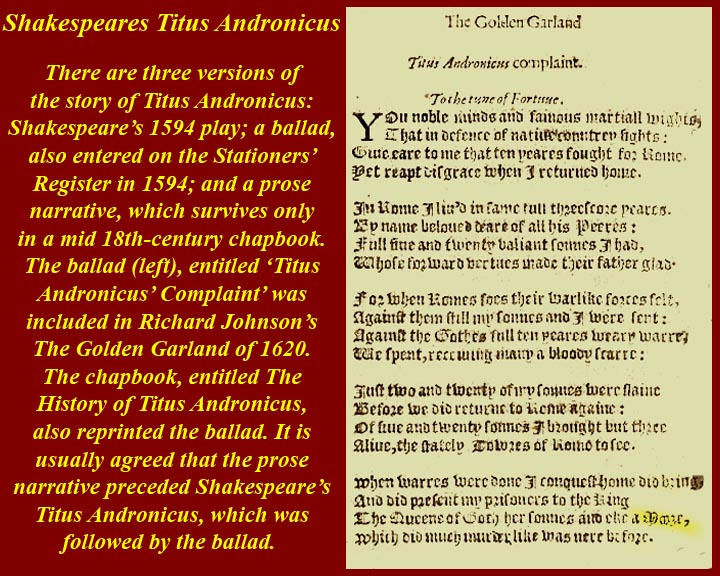 http://www.mmdtkw.org/RomeShak426-TitusSources.jpg
A prose narrative of the Titus Andronicus story appears to have been in circulation before Shakespeare dramatized the story.  What appears to be the same story circulated again later, and its full text is available at http://pages.unibas.ch/shine/chapbookwf.htm.  The text of a ballad in thirty quatrains, apparently composed after Shakespeare's Titus Andronicus, is available lower down on the same internet page at http://pages.unibas.ch/shine/chapbookwf.htm#ballad. 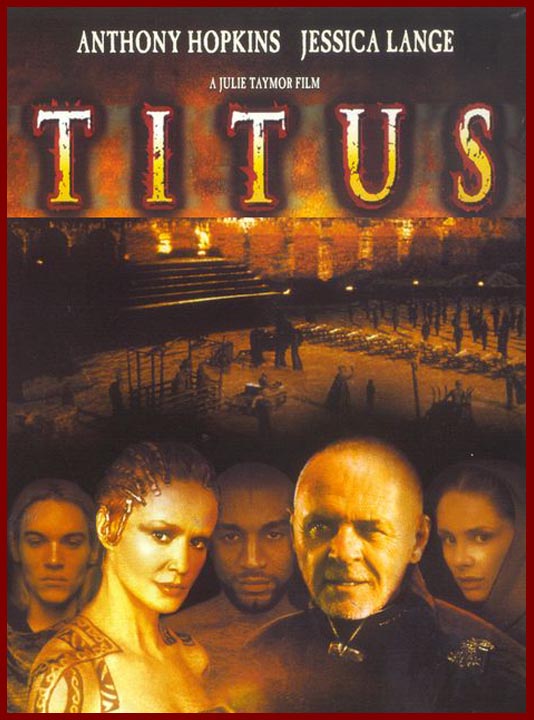 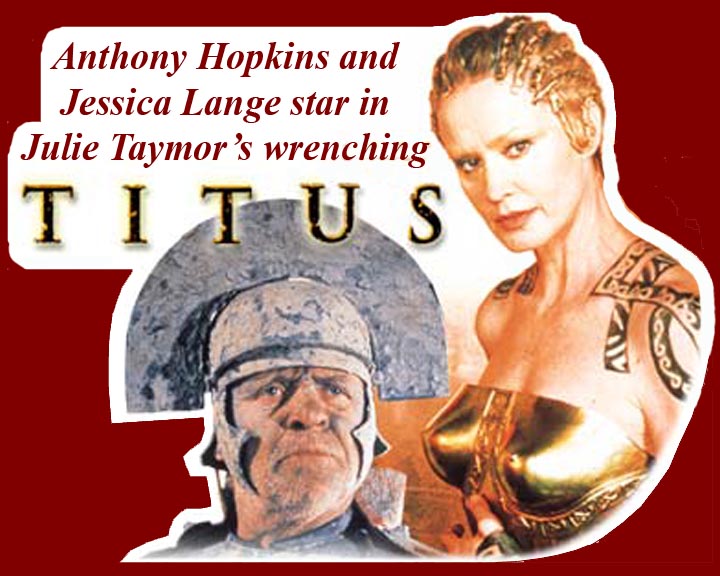 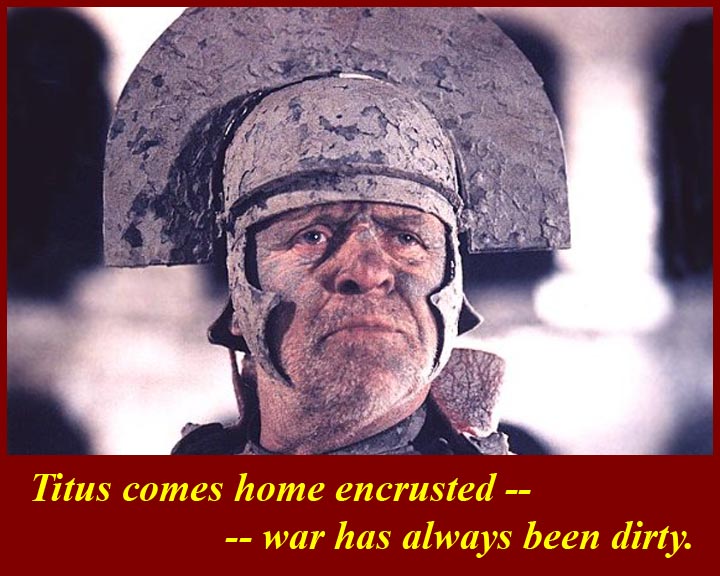 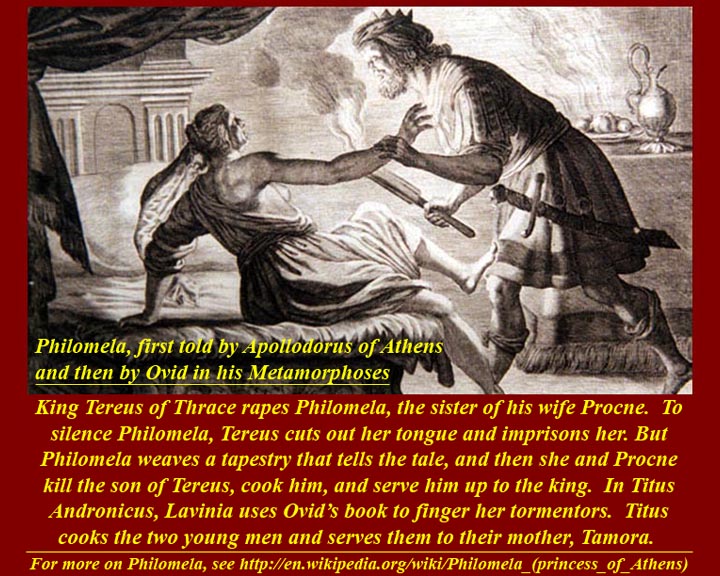 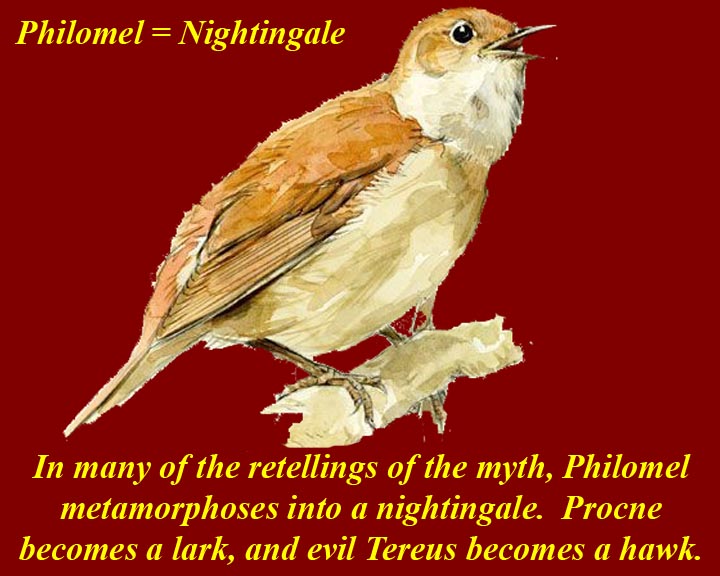 http://www.mmdtkw.org/RomeShak403-TereusPilomela.jpg
http://www.mmdtkw.org/RomeShak404-PhilomelNightingale.jpg
The violation of Lavinia in Titus is copied from the story of the Athenian princess, Philomela.  Philomel's sister, Procne, was married to a Thracian king, Tereus.  Tereus raped Philomela and then cut out her tongue to prevent her from accusing him.  She wove a tapestry, however, that showed the outrage and sent it to Procne.  Together, Philomela and Procne killed the son of Tereus, cooked him, and served him Tereus.  All three were changed into birds:  Philomela metamorphosed into a Nightingale, Procne became a Lark, and the evil king became a hawk. 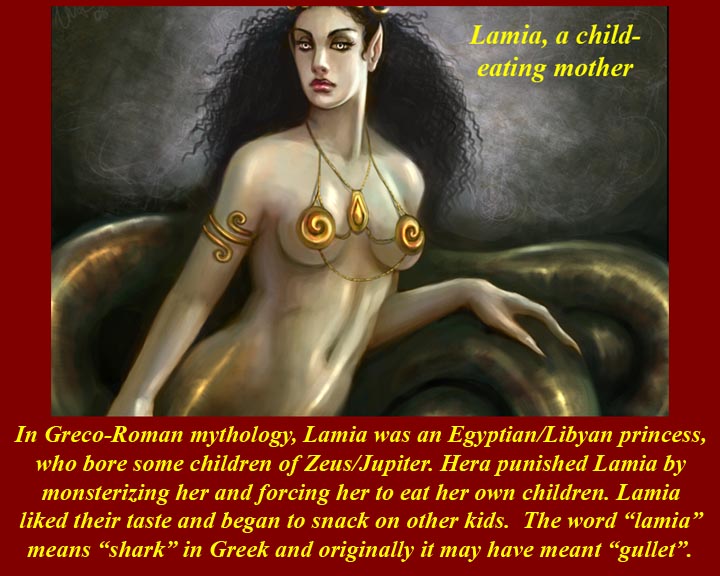 http://www.mmdtkw.org/RomeShak405-LamiaChildEater.jpg
An earlier legend tells of the Egyptian-Libyan woman, Lamia, who bore children of Zeus/Jupiter.  Hera, the wife of Zeus and ever jealous, monsterized Lamia and forced her to eat her own children.  Lamia liked the flavor of kids and thereafter became a child-devourer. Lamia is one f the modern Greek words that is used for a shark, and it may originally have meant "gullet".  The Romans used a plural form of Lamia's name for their myth of multiple child-eaters called Lamiae. 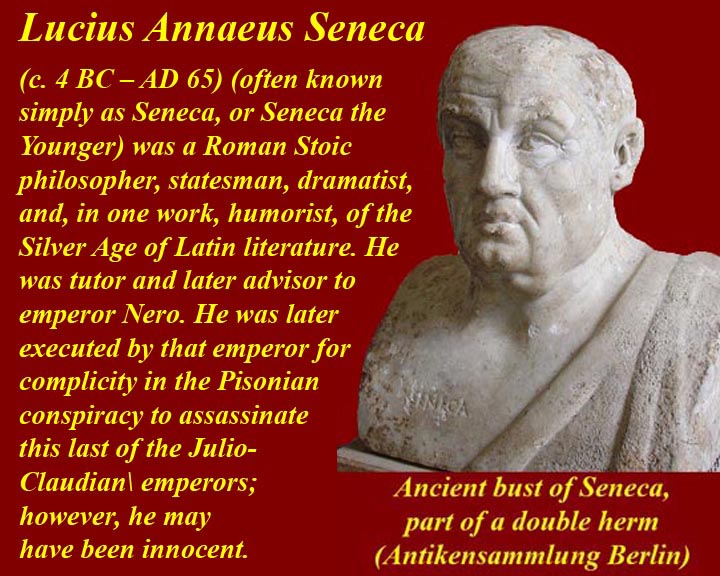 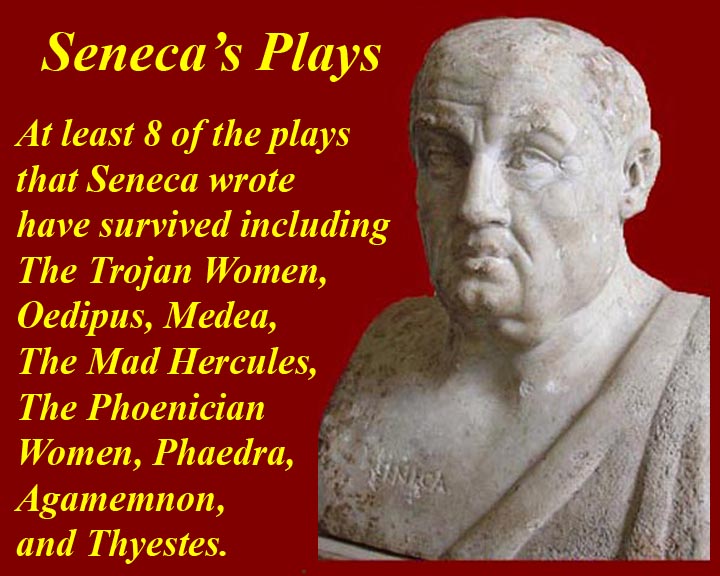 http://www.mmdtkw.org/RomeShak406-SenecaBerlin.jpg
http://www.mmdtkw.org/RomeShak407-SenecaPlays.jpg
Titus Andronicus owes its form to the "revenge plays" of Seneca.  Seneca was an extremely well known Stoic philosopher in his own time, and he was hand picked by Agrippina Minora to be the tutor of her twelve year old son Nero.  Nero eventually forced Seneca to commit suicide, but not before Seneca had become Nero's most important political adviser; it was only after Seneca's departure that Nero went off the tracks. Seneca wrote a number of philosophical treatises, at least on dramatic comedy, and at least ten macabre revenge plays, eight of which survive.  It is for the revenge plays that he is most remembered;  they formed the basis for the beginning of Elizabethan drama.  Seneca, of course was only reworking the plays of earlier Greek authors (mostly Euripides) who themselves were dramatizing pre-existing myths.  Unlike the revenge plays of Shakespeare and his contemporaries, those of Seneca were not meant to be acted on stage by a full cast.  Seneca's dramas, rather, were meant to be declaimed by a single performer -- ideally the author -- on a dimly lit stage or in a private chamber.  Seneca's works and the revenge play format were mightily reworked in the two millenia since they were written.  For more information about Seneca and the plays attributed to him, see http://www.theatredatabase.com/ancient/seneca_001.html, which also has links to other Seneca Internet sites. 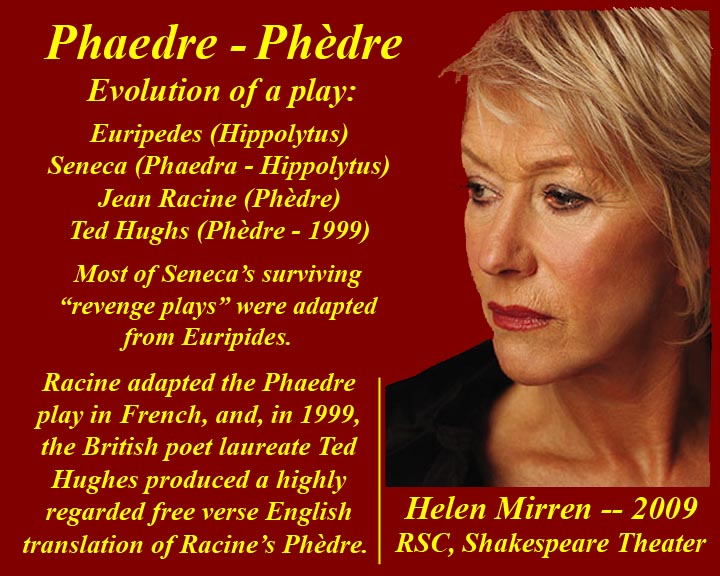 http://www.mmdtkw.org/RomeShak407a-SenecaPhedre.jpg
The Shakespeare Theater here in Washington recently presented a Royal Shakespeare Company version of Seneca's Phaedre as it was reworked by Jean Racine (Phèdre - 1677) and again reworked by Ted Hughs (Phèdre - 1999) the then Poet Laureate of Great Britain.  For more on the Racine Phèdre, see http://en.wikipedia.org/wiki/Phèdre.  It's worth noting that during the period of Elizabethan and later revenge plays, there was a similar flourishing of revenge play authors in France, of which Racine is one notable example. 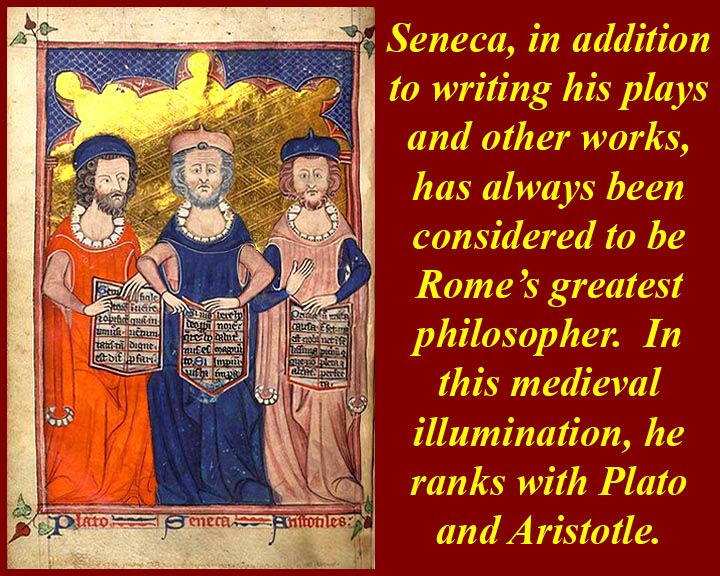 http://www.mmdtkw.org/RomeShak408-SenecaPlatoAristotle.jpg
Seneca's plays and their influence on European renaissance drama have overshadowed his earlier reputation as the greatest Roman philosopher.  In the image, he is bracketed by the two classical Greek philosophers who were considered to be his equals. 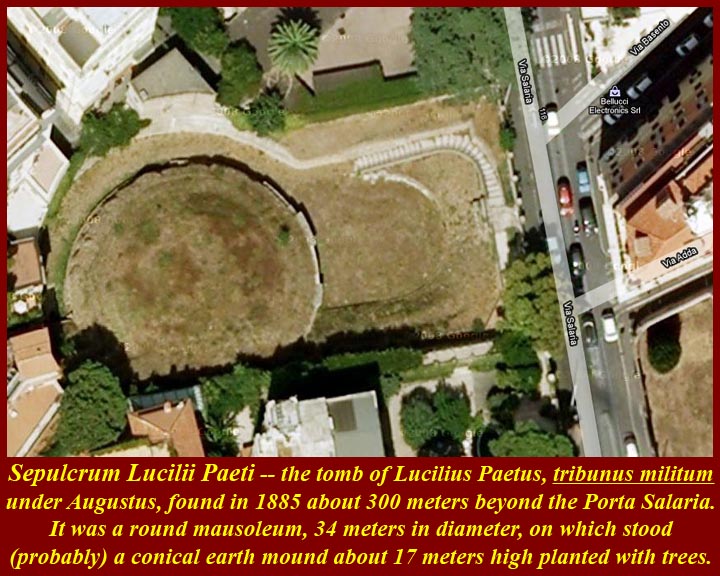 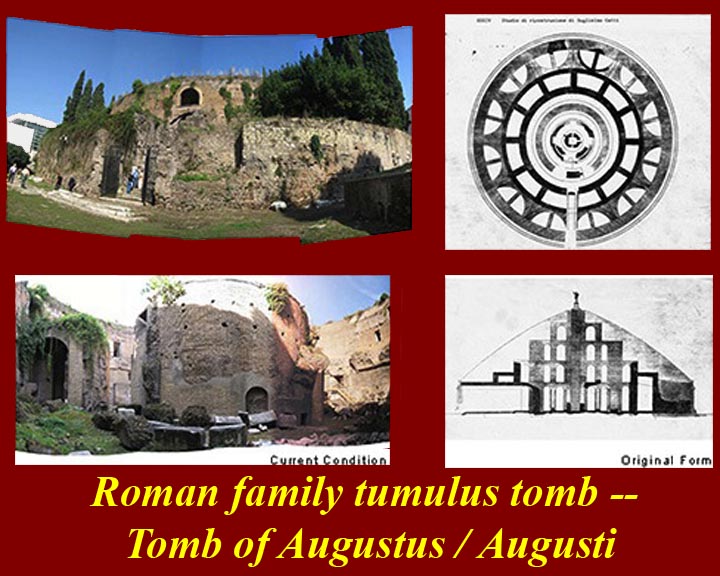 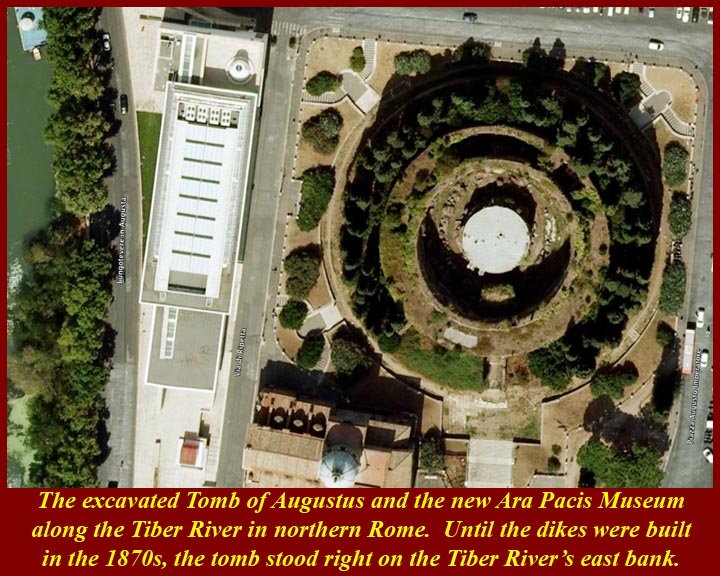 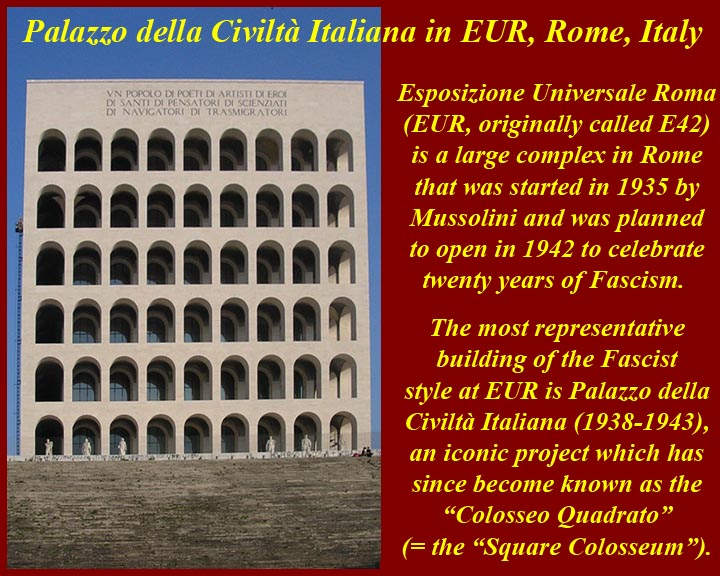 The Esposizione Universale Roma (E.U.R.) was Mussolini's project designed to glorify the 20th anniversary of the Fascist Party in 1942.  The project included two types of architecture, one of which reflected ancient Roman styles and the other, rationalismo, which was much more modern and which later became known as the representative Fascist style.  The rationalismo Palazzo della Civiltà Italiana (4), sometimes called the "Colosseo Quadrato" (squared Colosseum) or, more irreverently, called "Palazzo del Groviera" (after the Swiss cheese gruyère), was used in Titus as the site of the outdoor political rallies of Saturninus and Bassianus, the two sons of the previous emperor, who vie for the succession at the beginning of the film.
For more on Mussolini's grand architectural project, see http://www.romeartlover.it/Eur.html.  (The cars used by the two politically contending sons are also significant.  Saturninus is in a car like one of those often used by Hitler on his way to political rallies.  Bassianus in an a car that is the same model as the car  in which John F. Kennedy was assassinated.) 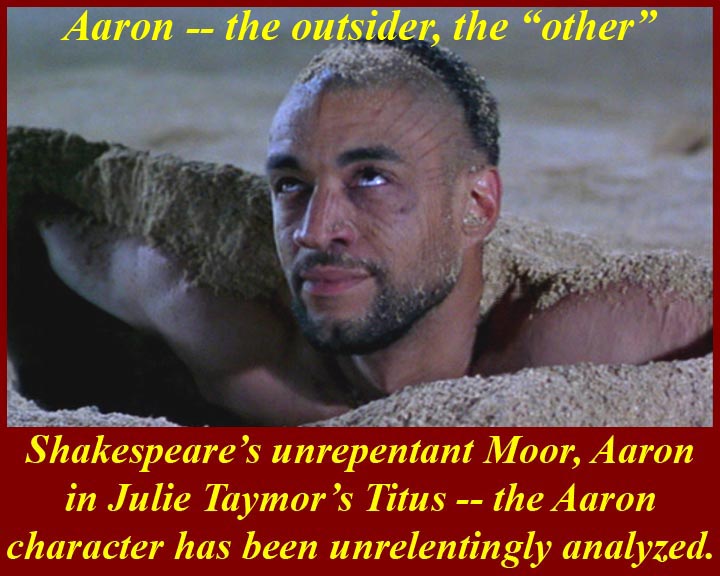 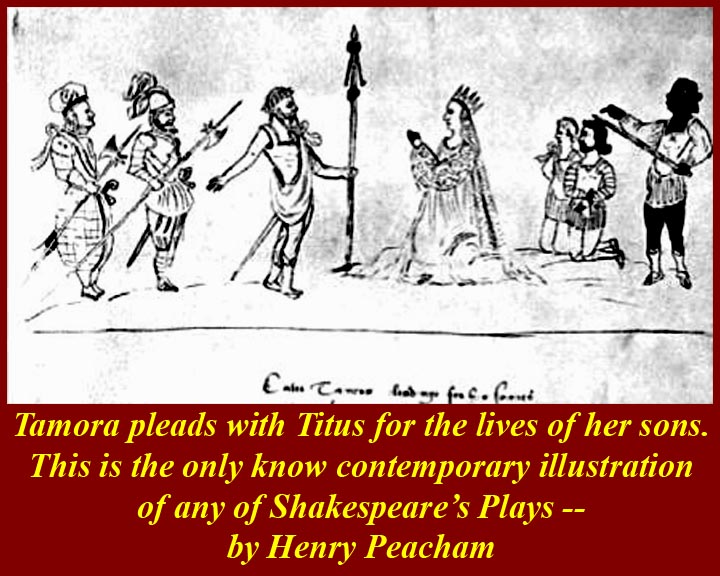 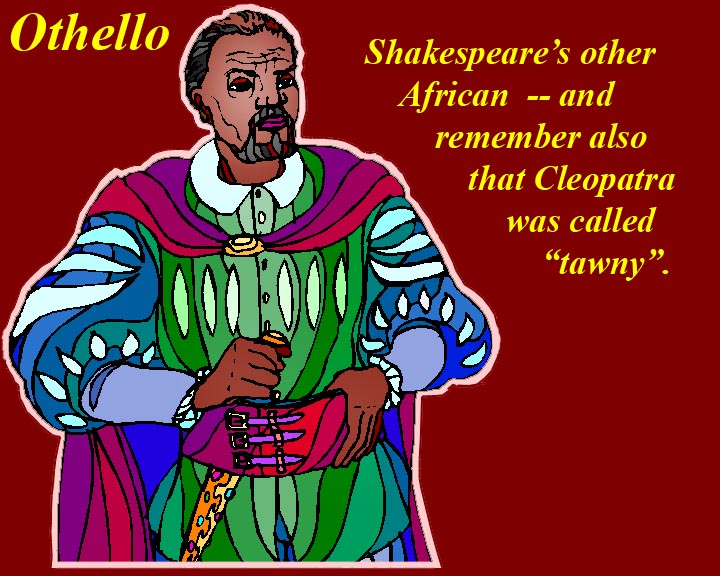 http://www.mmdtkw.org/RomeShak414-Aaron.jpg
http://www.mmdtkw.org/RomeShak415-ContempoTitus.jpg
http://www.mmdtkw.org/RomeShak416-Othello.jpg
Shakespeare's Aaron claims to be the instigator and villain of Titus Andronicus, although it is difficult to differentiate him from the many other villainous characters.  Despite copious and convincing internal evidence and despite the evidence of the only known contemporary illustration of any Shakespeare play, some Shakespeare revisionists have claimed that Aaron (as well as Othello) were not black Africans.  They argue that most "Moors" of Shakespeare's time were actually dark-skinned Caucasian Muslim Arabs or Spaniards from northern Africa.  It is usually accepted that Shakespeare's Moors were black and represented the feared "other".  Originally, the Moor denomination was applied to Muslims who conquered parts of Spain in the 8th century and settled there until they were driven out in the 15th century; it also denotes people from Morocco or Mauritania in North Africa. In Britain it was often used to refer to any Black person (particularly Muslims). The word 'Moor' appears in Shakespearean literature. It was spelled in a variety of ways (such as 'more', 'moir', 'moorish' 'moris' 'moryen') and often combined with 'black' or 'blak', as in 'black moor', 'blackamoor' and 'black more'. 'Blackamoor' was also used as a synonym for 'negro' in the 15th, 16th and 17th centuries.  For information about Moors in Elizabethan England and about Elizabeth's late reign moves to expel them, see http://www.nationalarchives.gov.uk/pathways/blackhistory/early_times/elizabeth.htm.  (The first black Africans appear to have reached England as soldiers in ancient Roman armies, and not all of the left when Rome lost control of the province.) 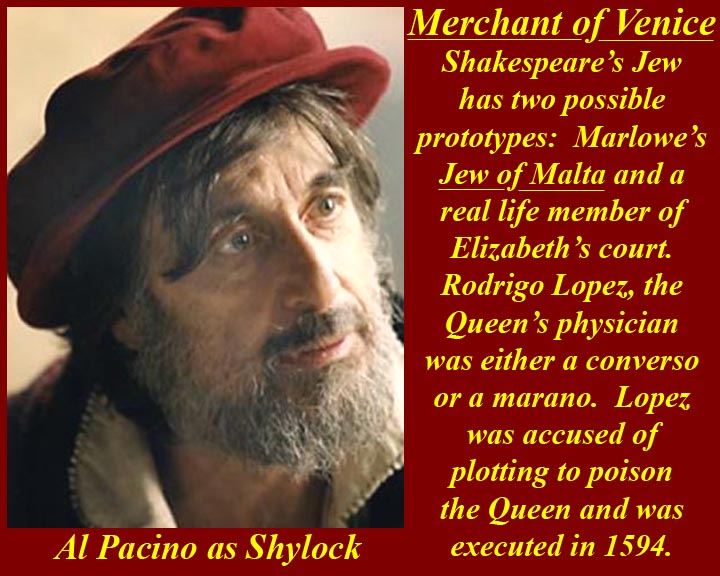 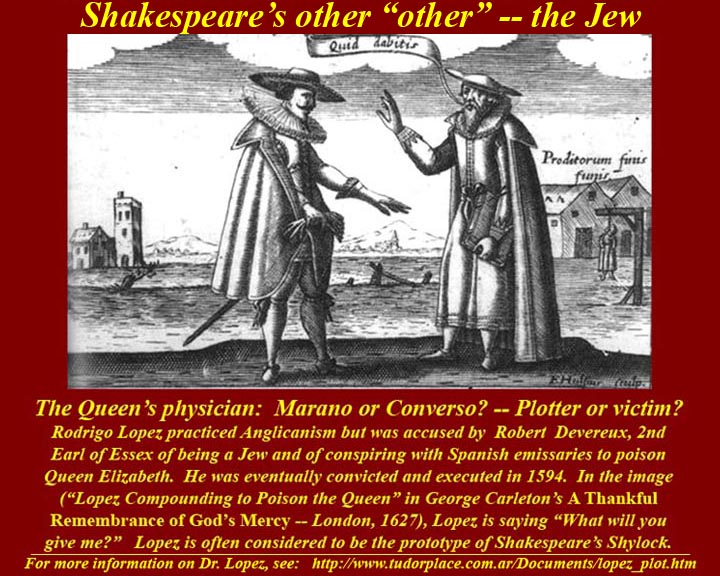 http://www.mmdtkw.org/RomeShak417-ShylockPacino.jpg
http://www.mmdtkw.org/RomeShak418-RodrigoLopez.jpg
Shakespeare's other "other" was Jewish.  The Merchant of Venice is believed to have been written between 1596 and 1598.  Although classified as a comedy in the First Folio, and while it shares certain aspects with Shakespeare's other romantic comedies, the play is perhaps more remembered for its dramatic scenes, and is best known for the character of Shylock.  Though Shylock is a tormented character, he is also a tormentor, so whether he is to be viewed with disdain or sympathy is up to the audience -- as influenced by the interpretation of the play's director and lead actors.

The formation of the Shylock character is thought to have been influenced by Barabas, the title character of Marlowe's revenge play, The Jew of Malta, and by the case of the Queen's Jewish physician, Rodrigo Lopez, who was executed in 1594 after being convicted of plotting to poison the Queen.  Whether Lopez was guilty or not guilty is still hotly debated.  There was certainly circumstantial evidence against him in the case prosecuted by Robert Devereux, 2nd Earl of Essex, who accused Lopez of being a "marano" (i.e., a false "converso" = convert to Christianity/Anglicanism), and we have no way of knowing what other evidence may have been suppressed.  Devereux's own later disgrace, plotting, and execution complicate our view of his prosecution of Lopez. For information on "the Lopez plot", see http://www.tudorplace.com.ar/Documents/lopez_plot.htm and about the history of Jews in England, see http://www.jewishvirtuallibrary.org/jsource/vjw/England.html. 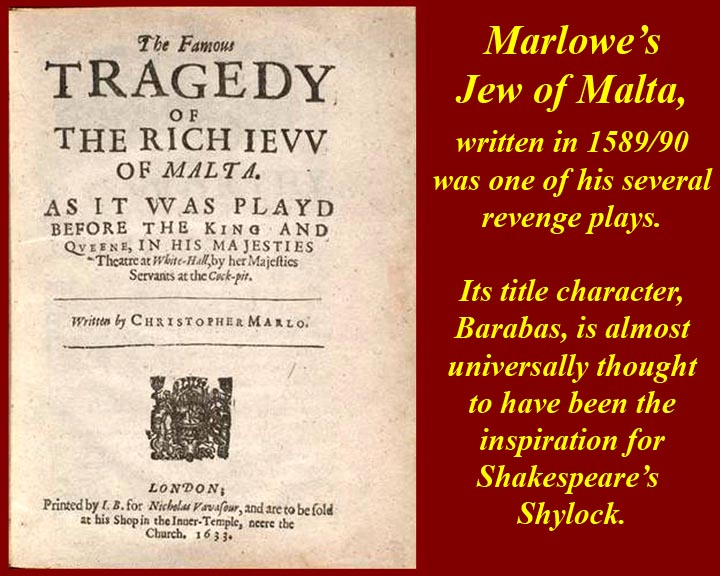 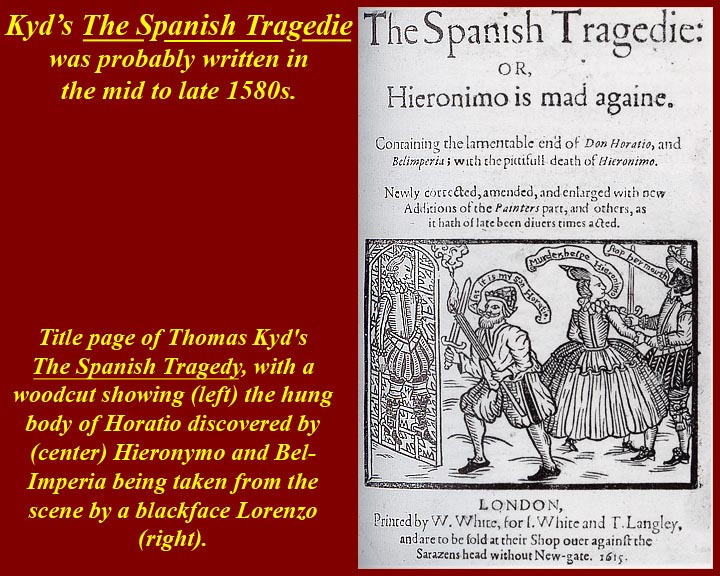 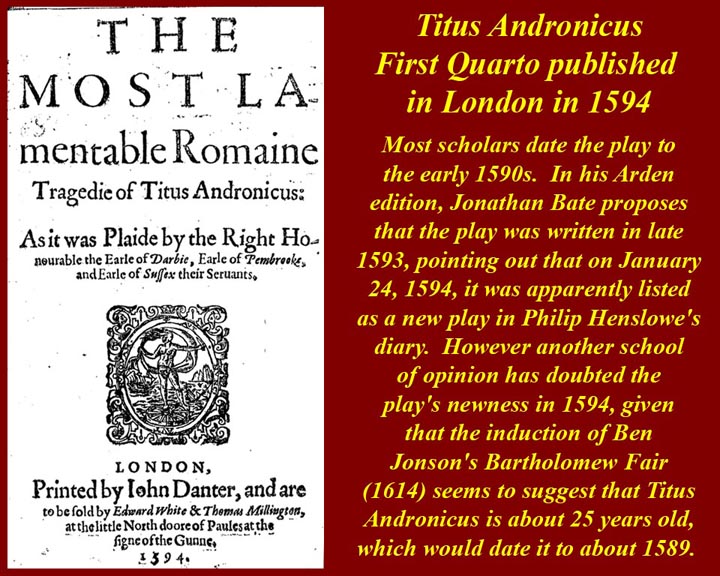 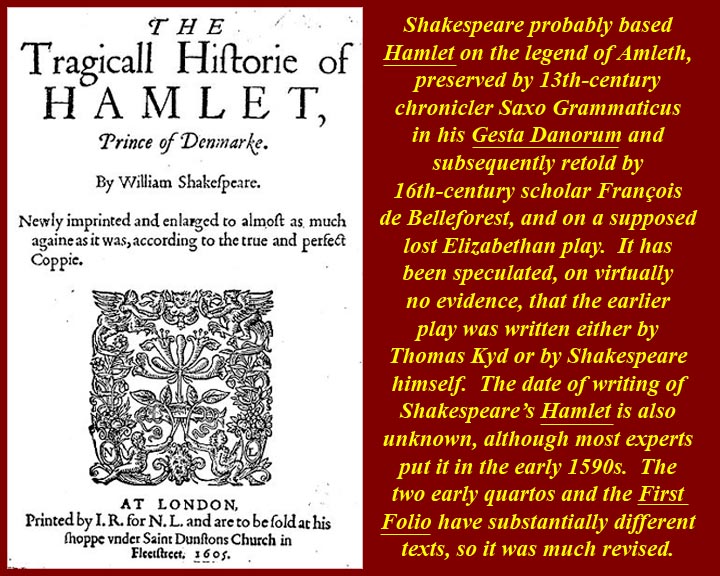 The Senecan model, though never followed slavishly, makes for a clear definition of the type, which almost invariably includes

A secret murder, usually of a benign ruler by a bad one,
A ghostly visitation of the murder victim to a younger kinsman, generally a son,
A period of disguise, intrigue, or plotting, in which the murderer and the avenger scheme against each other, with a slowly rising body count,
An eruption of general violence at the end, which (in the Renaissance) is often accomplished by means of a feigned masque or festivity, and
A catastrophe that generally decimates the dramatis personae, including the avenger.

Both the stoicism of Seneca and his political career (he was an adviser to Nero) leave their mark on Renaissance practice.  In the English plays, the avenger is either stoic (albeit not very specifically) or struggling to be so; in this respect, the main thematic concern of the English revenge plays is the problem of pain. Politically, the English playwrights used the revenge plot to explore themes of absolute power, corruption in court, and of faction--all concerns that applied to late Elizabethan and Jacobean politics as they had to Roman politics. (for more on revenge plays, see the link above.) 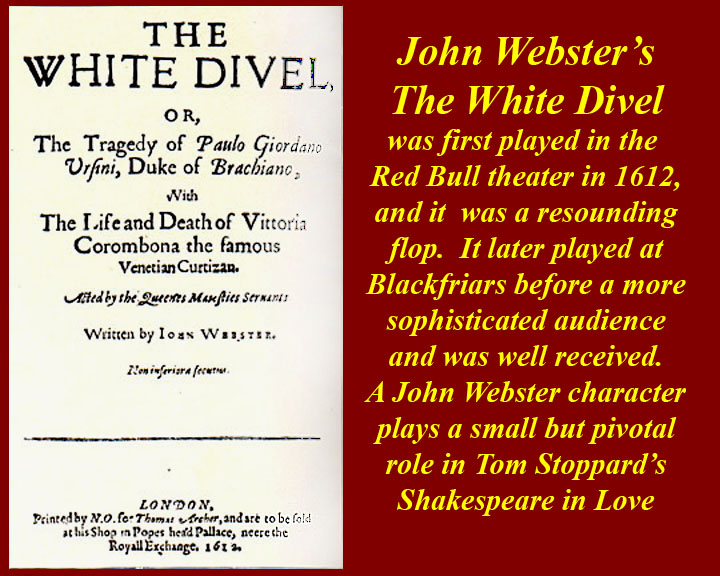 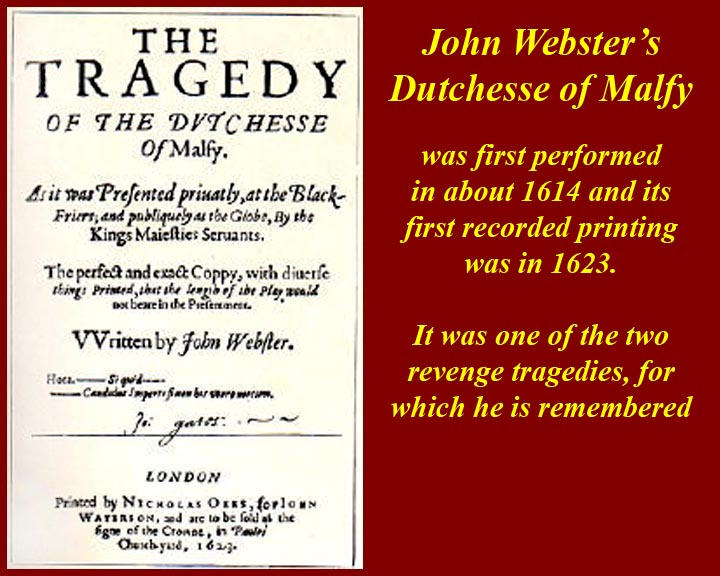 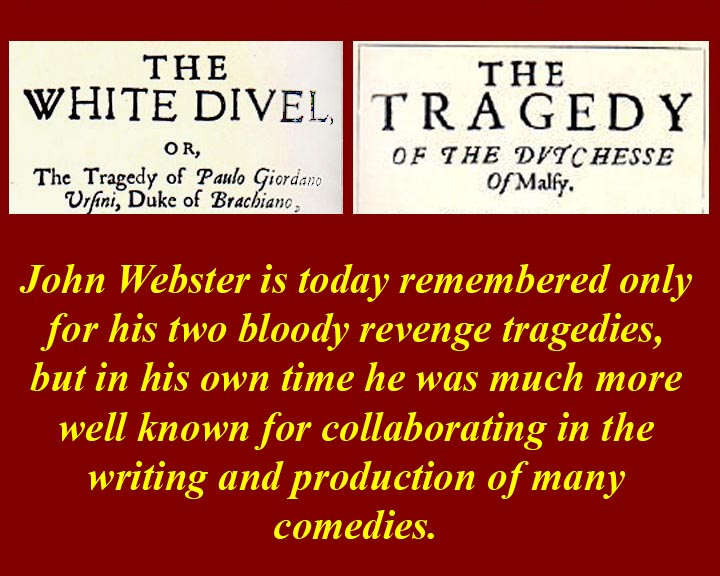 http://www.mmdtkw.org/RomeShak423-WebsterWhiteDevil.jpg
http://www.mmdtkw.org/RomeShak424-WebsterDuchessMalfi.jpg
http://www.mmdtkw.org/RomeShak425-WebsterComedies.jpg
A relative latecomer to English revenge drama was John Webster, whose White Devil appeared perhaps in 1608 and was printed in 1612 and whose Duchess of Malfi which appeared before 1614.  If you saw Tom Stoppard's Shakespeare in Love, you will remember the teen-aged boy who, early in the film, identified himself as Webster, who exposed Viola De Lesseps as a woman on stage, and who told Queen Elizabeth that he liked "the parts with the blood" in Romeo and Juliet.  Although Webster is remembered for his two revenge tragedies, in his own time he was better known as a collaborator in writing comedies and satires.  For a short bio of Webster, see http://en.wikipedia.org/wiki/John_Webster. 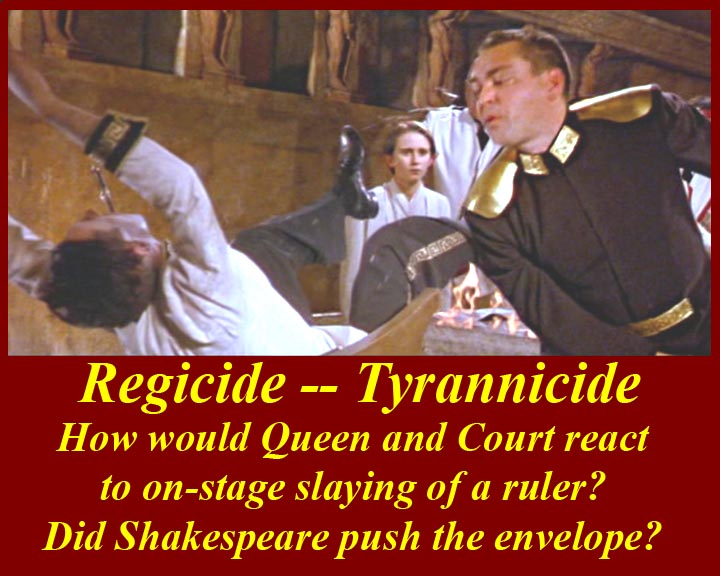 http://www.mmdtkw.org/RomeShak427-Tyrannicide.jpg
One can only speculate how the regicide-on-stage, the killing of Saturninus, would have been received by the Court of Elizabeth I.  Elizabeth herself was, of course, also a regicide having tried and executed Mary Queen of Scots on evidence of letters written during the Babington Plot (see http://en.wikipedia.org/wiki/Babington_Plot).  Mary was executed on 8 February, 1587, in the Great Hall of Fotheringhay Castle, Northamptonshire.  For more information on Mary, including forward internet links, see http://englishhistory.net/tudor/relative/maryqosbiography.html. 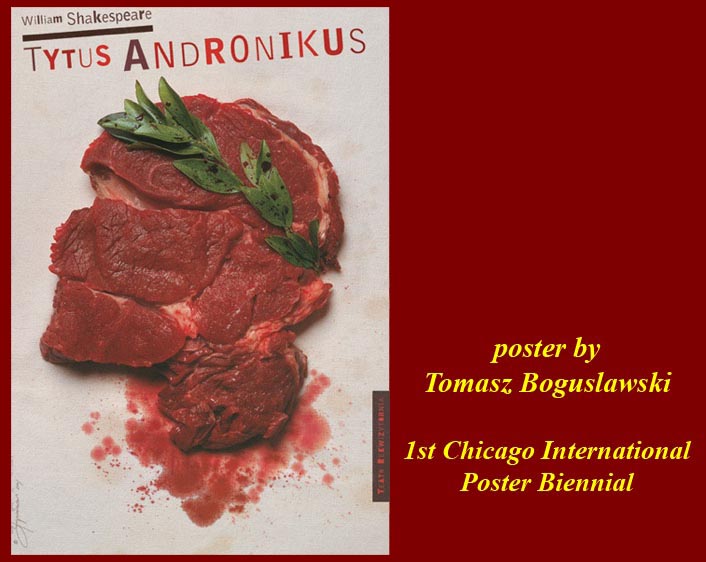 http://www.mmdtkw.org/RomeShak428-Tomasz-Boguslawski-Tytus.jpg
Is Titus an abattoir adventure as this poster implies? 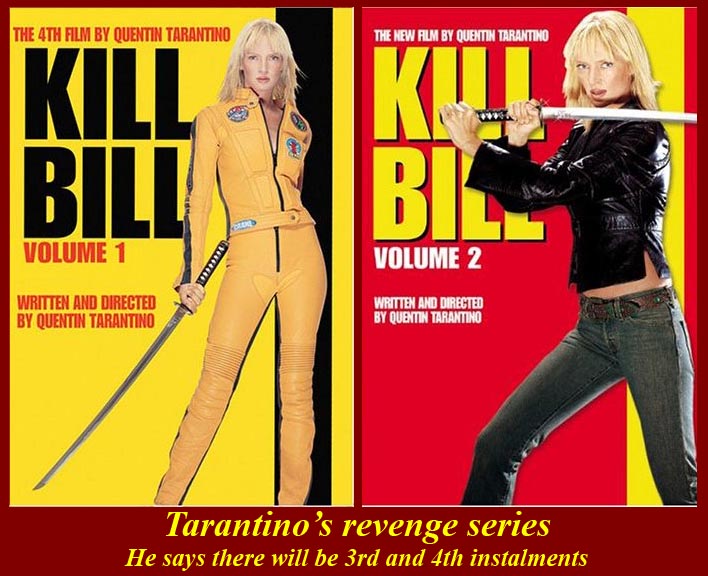 http://www.mmdtkw.org/RomeShak428a-KillBill.jpg
And how does Quentin Tarantino's Kill Bill fit in?