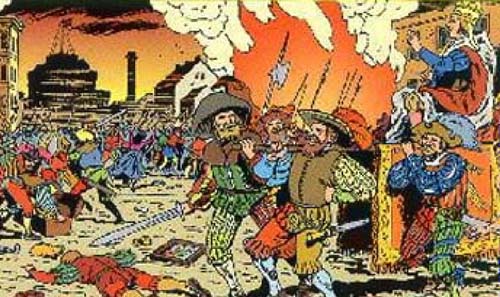 Landesnechts conduct a mock Papal progress during the Sack of Rome

The 1527 Sack of Rome was a result of a unique set of circumstances involving the leaders of emerging European powers and Pope Clement VII Medici. The Protagonists were:

Our information about the Sack and its causes and aftermath come mostly from the writings of the Florentine historian Luigi Guicciardini, who witnessed the Sack of Rome and is regarded as a reliable source, and the autobiography of Benvenuto Cellini, a notorious braggart and self-aggrandizer. Catholic Church records are voluminous as are archives of the Roman families and of European royal and aristocratic houses. Some of these sources are suspected of bias, but modern historians are fairly certain that they have worked out what happened and who was "responsible".

Did the Sack of 1527 close out the Renaissance in Rome?

Many Art Historians say it did, but they are the ones who focus in on the school that Raphael left behind when he died: Raphael's studio -- his successors -- broke up the school and fled to the courts of Europe. Therefore, they say, the Renaissance (or at very least Rome's "High Renaissance") was at an end. The fact that a new period, called the "Late Renaissance" followed immediately and that the Baroque period (which Art Historians pretty much loath) produced some of Rome's most highly and intricately decorated churches and palaces does not impress these critics. In fact, art and architecture flourished in Rome in the years after the sack, and the Baroque style spread through Europe from Rome and became the new currency in both fields.

Many of the great humanists were already dead by the time of the Sack, and many more fled while and after it happened. But there was another flowering in Rome, based on the Counter Reformation, but that was too Catholic and much too Jesuit and therefore, even until today, anathema to politically correct European and American academics and art critics.

The Sack caused much destruction and looting of portable art and artifacts, but a simple inventory will show that much of the stationary decorative art survived -- the great pre-Sack frescoes and altarpieces in churches and chapels and palaces are still there today, and they were mightily augmented in the century after the sack.

Certainly some statuary was torn down, but Rome's greatest ever sculptor, GianLorenzo Berini was still to come -- his father, himself a great sculptor and artist and GianLorenzo's teacher, wasn't even born until 1562. Bernini stood so far above his Roman Baroque contemporaries that they are often forgotten, but their work is everywhere in Rome. Gauli, one of the long-lived GianLorenzo's  young students -- still under the master's influence -- produced the "multimedia" illusionist extravaganza on the ceiling of the Gesu (Exaltation of the Name of Jesus) in the 1670s, a century and a half after the Sack.

Giambologna and other great Mannerists also came well after the Sack -- even though Raphael's immediate successors had left Rome, this new Mannerist School was founded shortly thereafter.

Caravaggio was born in 1573 and started seriously painting after 1593. Between then and 1610, when he died alone on the beach at Port'Ercole, he founded another new school to rival the mannerists. First there were Roman "Caravaggisti", and then there were Caravaggisti everywhere. Caravaggio's influence in Rome itself was remarkable but short-lived, lasting only until the 1620s. His foremost followers elsewhere in Italy were Orazio Gentileschi, Artemisia Gentileschi, and the Spaniard José de Ribera. Outside Italy, the Dutch painters Hendrick Terbrugghen, Gerrit van Honthorst, and Dirck van Baburen made the city of Utrecht the foremost northern center of Caravaggism. The single most important painter in the tradition was the Frenchman Georges de La Tour, though echoes of Caravaggio's style can also be found in the works of such giants as Rembrandt van Rijn and Diego Velázquez.

So the answer is: No, the Roman Renaissance did not end with the Sack of Rome.