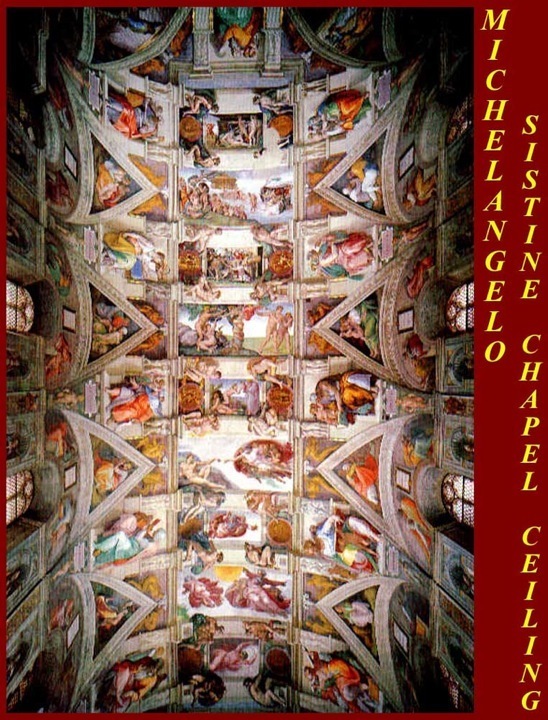 Who? There were, of course, hundreds of artists -- maybe thousands, if you count all the self-identified "artists" -- in Rome during the Renaissance. We can only deal with some of those who have traditionally identified as major artists or trend-setters by art historians.

What? Our focus will be on paintings (mostly frescoes, but a few easel works) and on sculpture (and the sculpture will almost invariably be large scale).

When? Our period starts with Fra Angelico (ca.1400 - 1455), although the work we will look at is from 1549. Fra Angelico, in some ways, has more in common with Medieval artist than with later Renaissance artists, but his painting of the Nicholas Chapel in the Vatican Papal Palace started the great redecoration surge in the Vatican apartments, which was then emulated by ecclesiastic and non-ecclesiastic familiae. We will continue through Bernini, Caravaggio, and Gaulli, whose art is often considered part of a "next" or different artistic movement, the baroque. We will deal with the artists in the order of their birth, for no other reason than that it's convenient, even though the overlaps are sometimes strange because of longevity or lack of it: Michelangelo was born before Raphael, but outlived him and was therefore productive for many years after Raphael's dissolute death.

Where? It's Rome, of course: even if the artists were not born there they were attracted there by the largesse of the popes, cardinals, and civic lords. Attracted, in fact, may be a too benign word: more often than not, artists were summoned or sent to Rome by patrons -- almost the way players of major sports teams are traded. There were very few "free agents". And inside Rome, the artists routinely went where the biggest money and commissions were, which often meant the Vatican.

How? Commissions, large and small, were the order of the day. It was possible to make a small living by painting or sculpting for the open market -- Caravaggio sold small paintings in the Campo de' Fiori for a few years before he joined the openly homosexual salon of Cardinal Francesco del Monte and was thereafter directed toward larger commissions. The ambition of every artist who came to or was summoned to Rome was to get long-term employment through large commission -- everyone except Michelangelo who was kept for years in semi-involuntary servitude to Julius II and other Popes.

There is, of course, one more question: Why? It is doubtful that, through some genetic accident, numerous great artists appeared during the Italian Renaissance and at no other time. The answer seems to be environment, and, specifically, a wealthy environment in which those with wealth were willing to subsidize the training and keeping of many of those who had artistic talent and who appeared in the in the normal distribution of talents among the population. In short, no more artists than usual showed up, but those who did were encouraged and paid for their efforts.

The artists we will discuss are (links below connect to artist pages of the
ARTCYCLOPEDIA):

Artemesia Gentileschi (Orazio's daughter and the first woman to become a member of the Accademia di Arte del Disegno in Florence.

Internet links for this Unit:

By far the most useful Internet source of information on Italian (Roman) Renaissance art and artists is the Web Gallery of Art hosted by the Hungarian Academy of Sciences in Budapest, Hungary. It is located on the Internet at http://www.wga.hu/index1.html, but actually it is often easier to simply use the Google search engine and to search for the name of the artist and the letters "kfki" (without the quotes), those letters being the acronym for the name of the academy in Hungarian (for example, type this in the Google search box: raphael kfki.) Several of the images used in this unit are downloads from the Web Gallery of Art, and most of the handouts prepared for the unit are also partially derived from the Gallery.

The Catholic Encyclopedia provides biographies for most well known Italian Renaissance artists, especially those who were active in Rome. The Internet address is http://www.newadvent.org/cathen/.  Once on that page either type in the name of the artist or click on the first letter of the artists name to pull up the alphabetic index.

For art in the Vatican (Sistine Chapel, Papal apartments, Vatican Museums, and several other categories, go to the Christus Rex Internet site at http://www.christusrex.org/, being careful to bypass the obvious political and religious propaganda.

http://www.artrenewal.org/ a huge database that can take some time to load between pages, but worth the wait -- thousands of large scale images along with biographical information