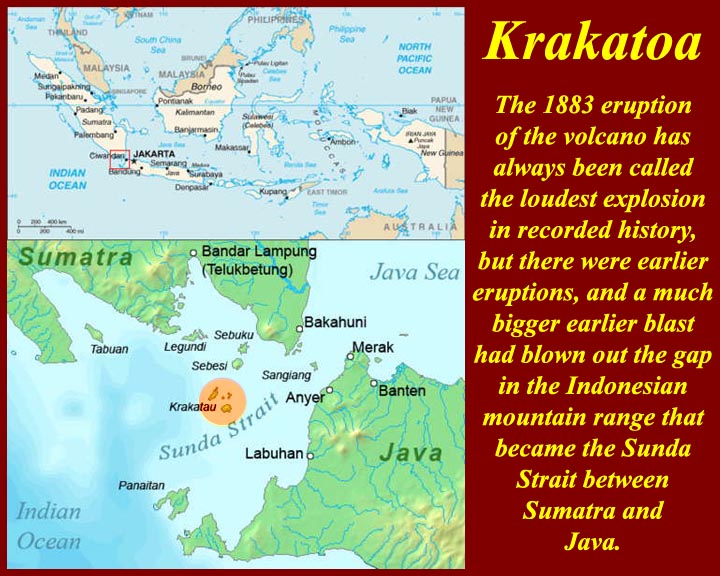 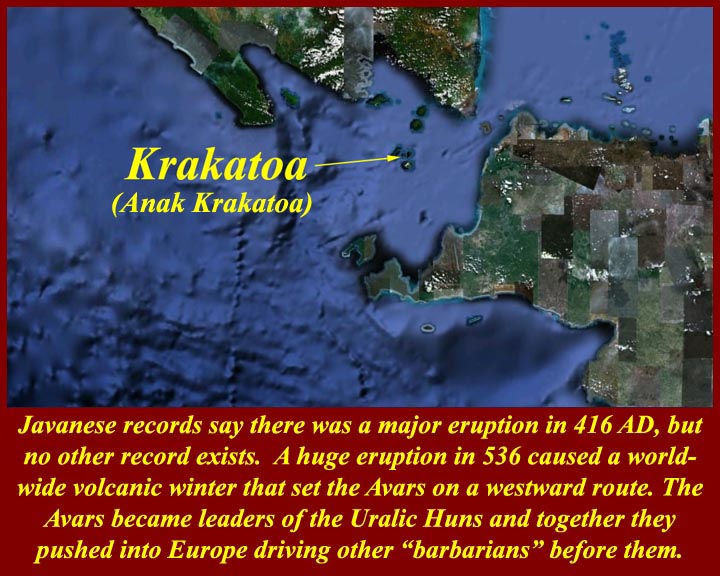 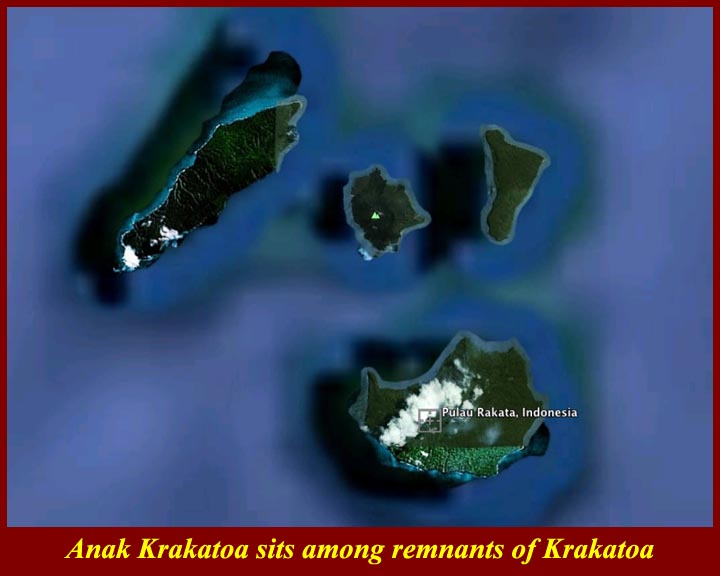 http://www.mmdtkw.org/MedRom0200aKrakatoaSundaStrait.jpg
http://www.mmdtkw.org/MedRom0200bKrakatoa535.jpg
http://www.mmdtkw.org/MedRom0200cAnakKrakatoa.jpg
A theory has been put forth that an eruption of Krakatoa in 536 AD caused a "volcanic winter" that led to the collapse of the Avars on China's western border -- they were the guys that China was trying to keep out with their Great Wall.  Volcanic climate change caused the grasses of Central Asia to die off and that reduced the horse herd of these mounted warriors.  The Avars started a long westward trek looking for (literally) greener pastures and ended up in the Urals where they linked up with other mounted warriors called Huns.  The Avars took over the confederation and led the combined Hunnic/Avar forces into Europe pushing weaker (but still "dangerous") "barbarians before them. 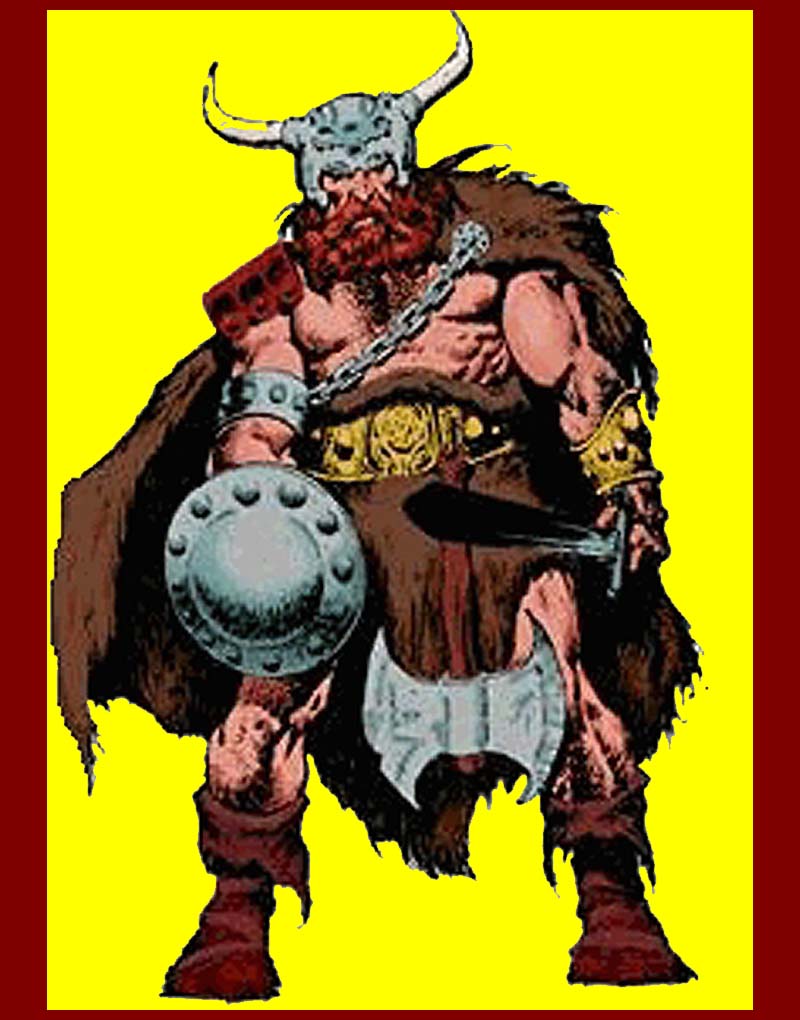 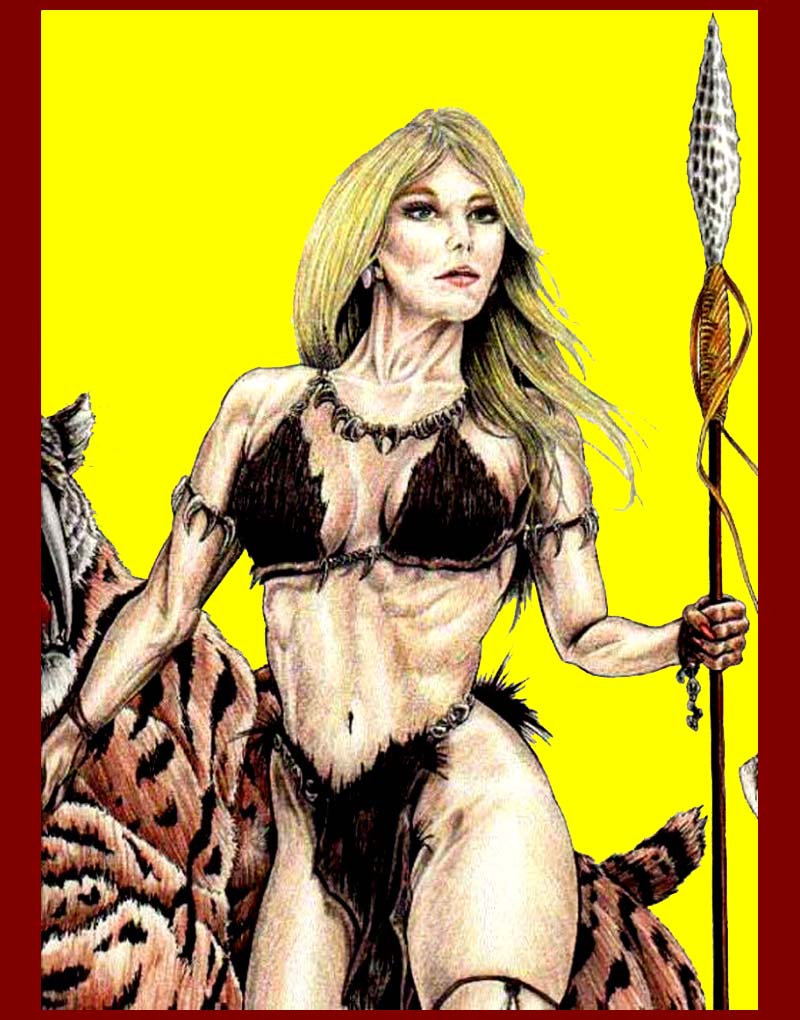 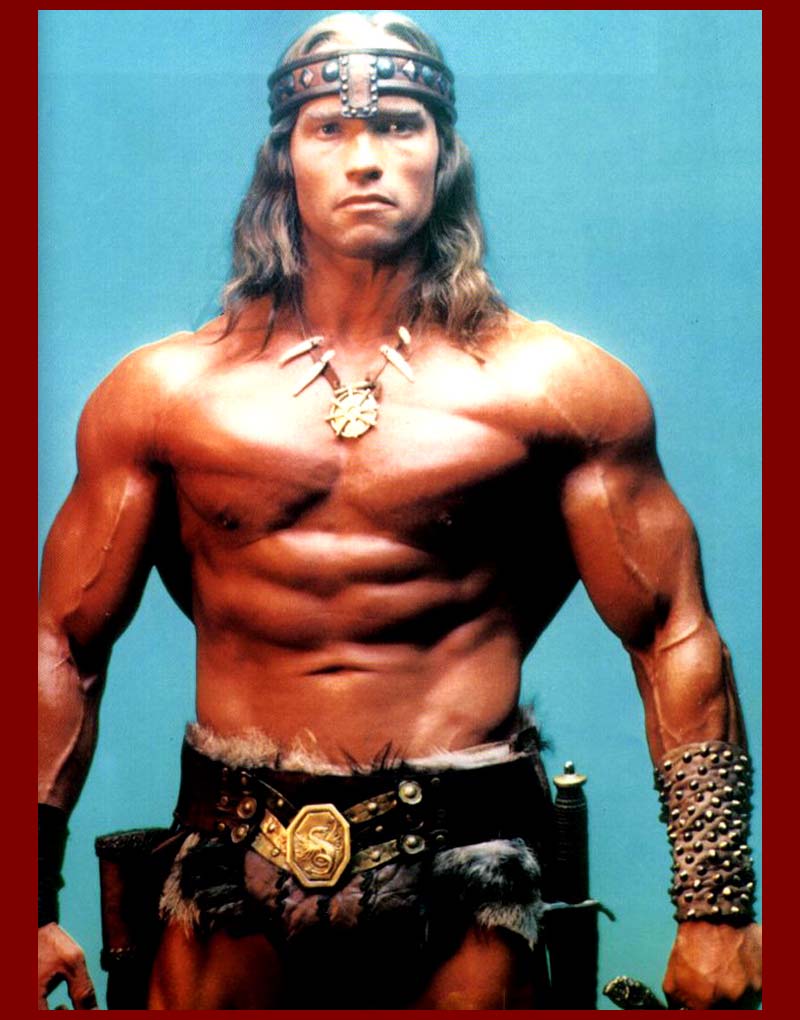 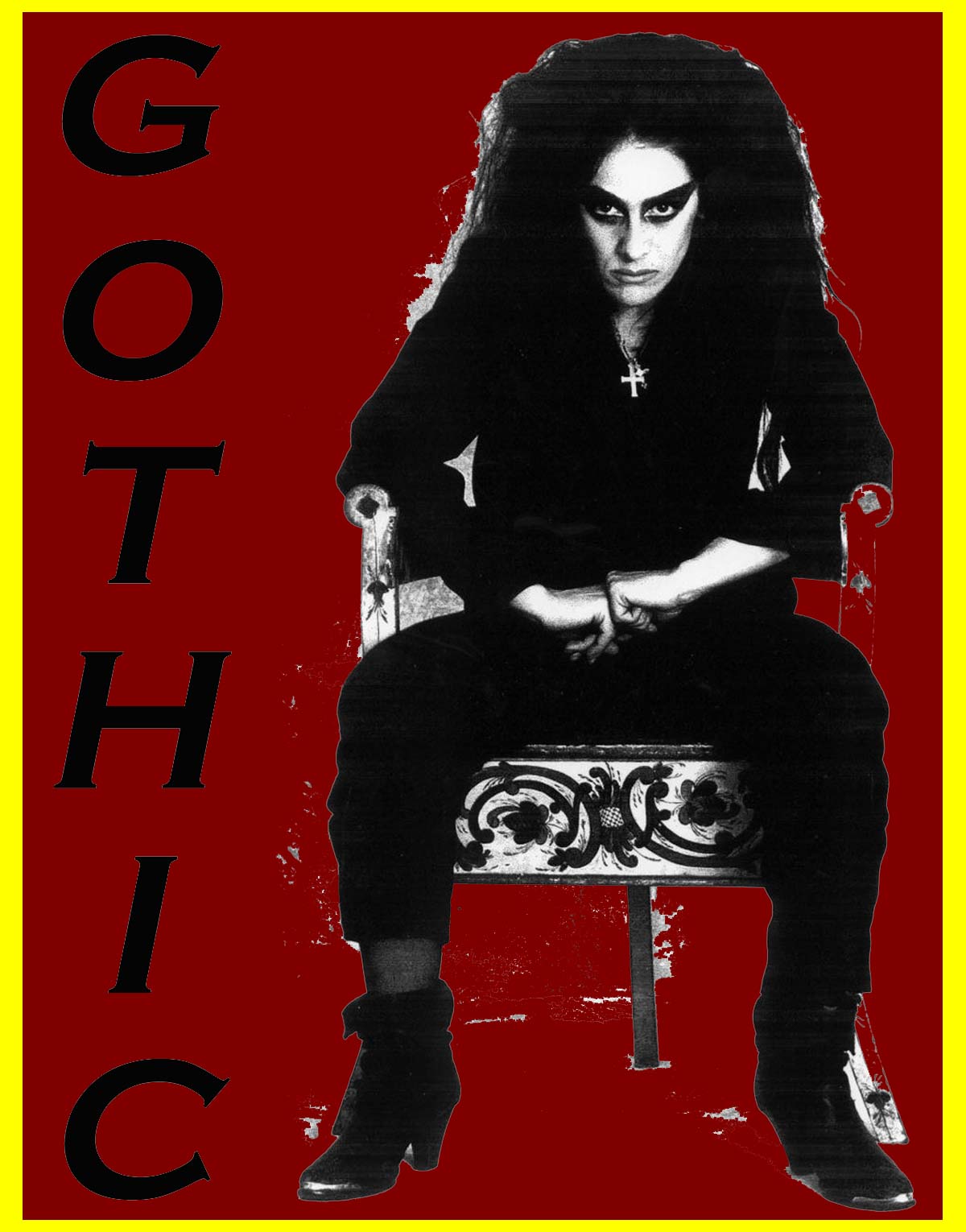 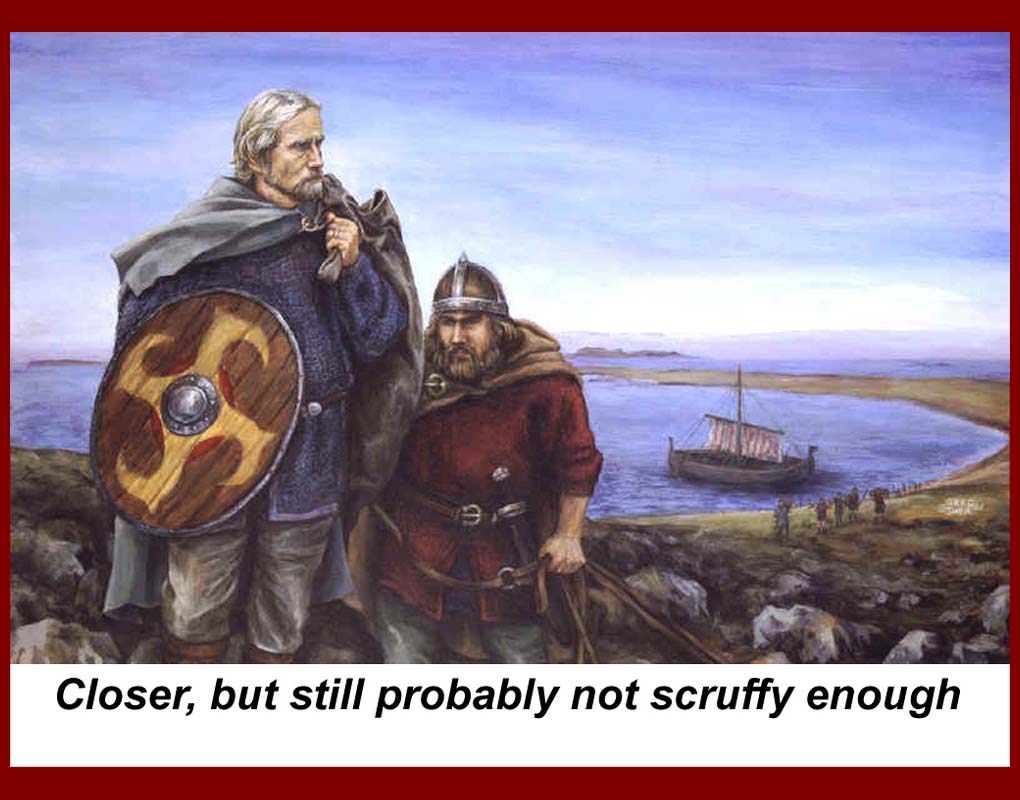 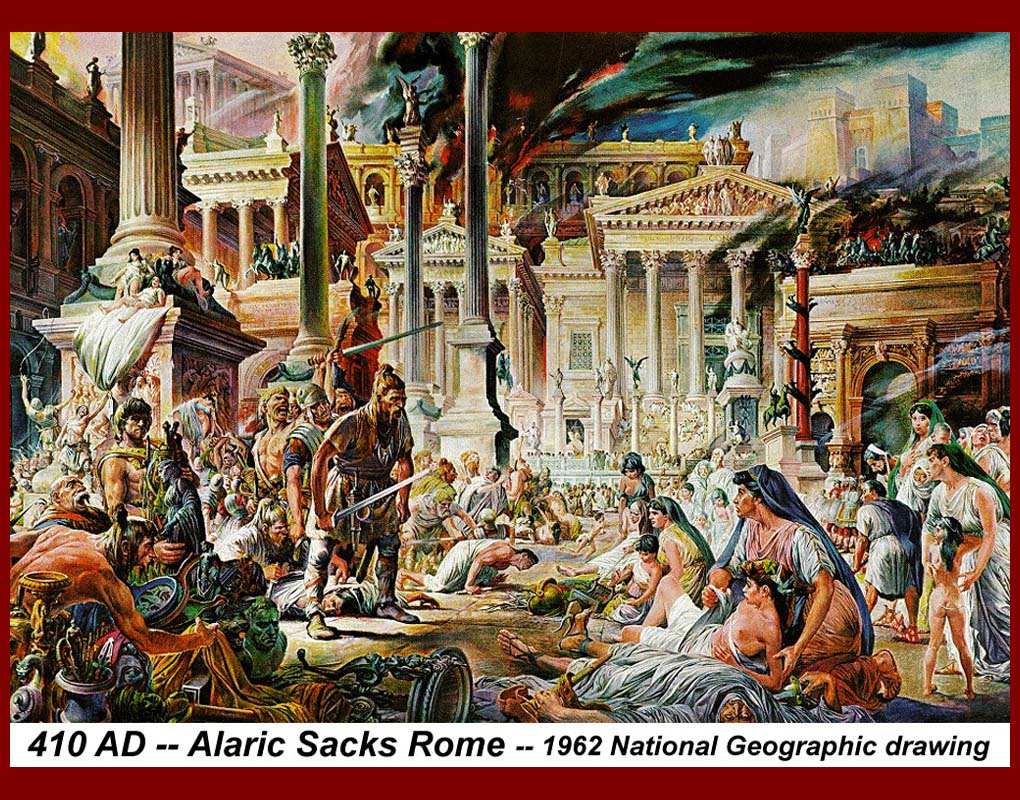 http://www.mmdtkw.org/MedRom0206AlaricRomeNGeog.jpg
Alaric in Rome -- National Geographic 1962.  The image, which we've seen before as a generic barbarian sack of Rome, is now revealed to be a guess at how Alaric's sack of Rome (410 AD) might have appeared. 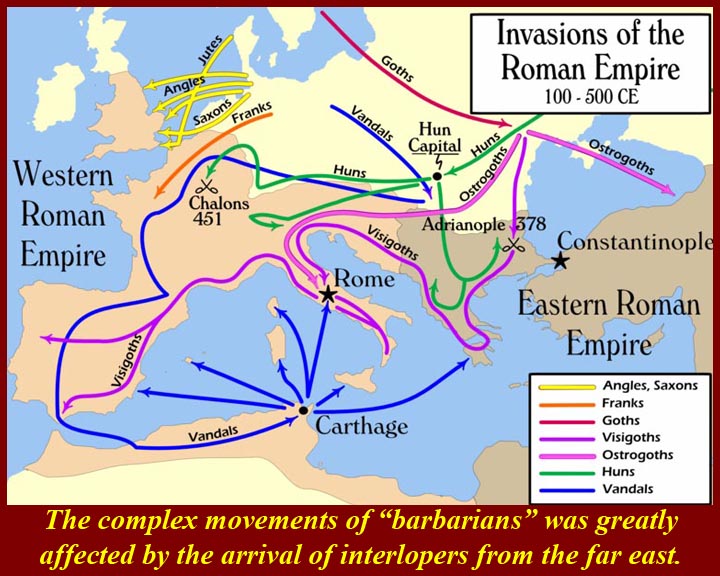 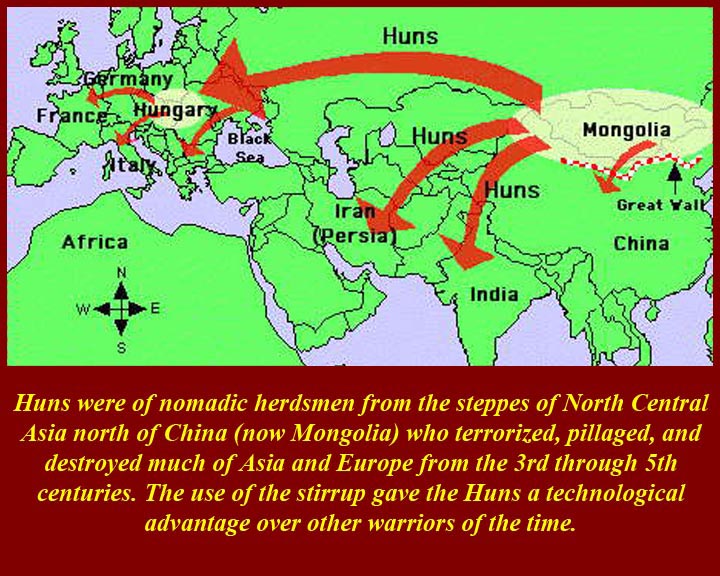 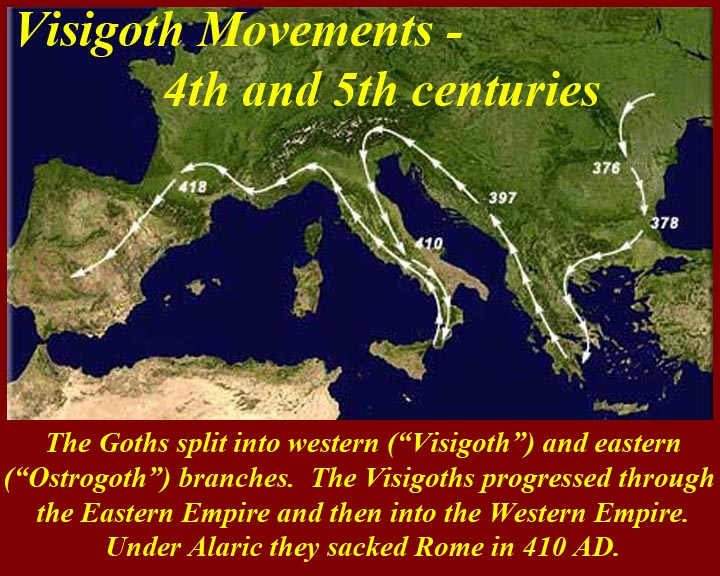 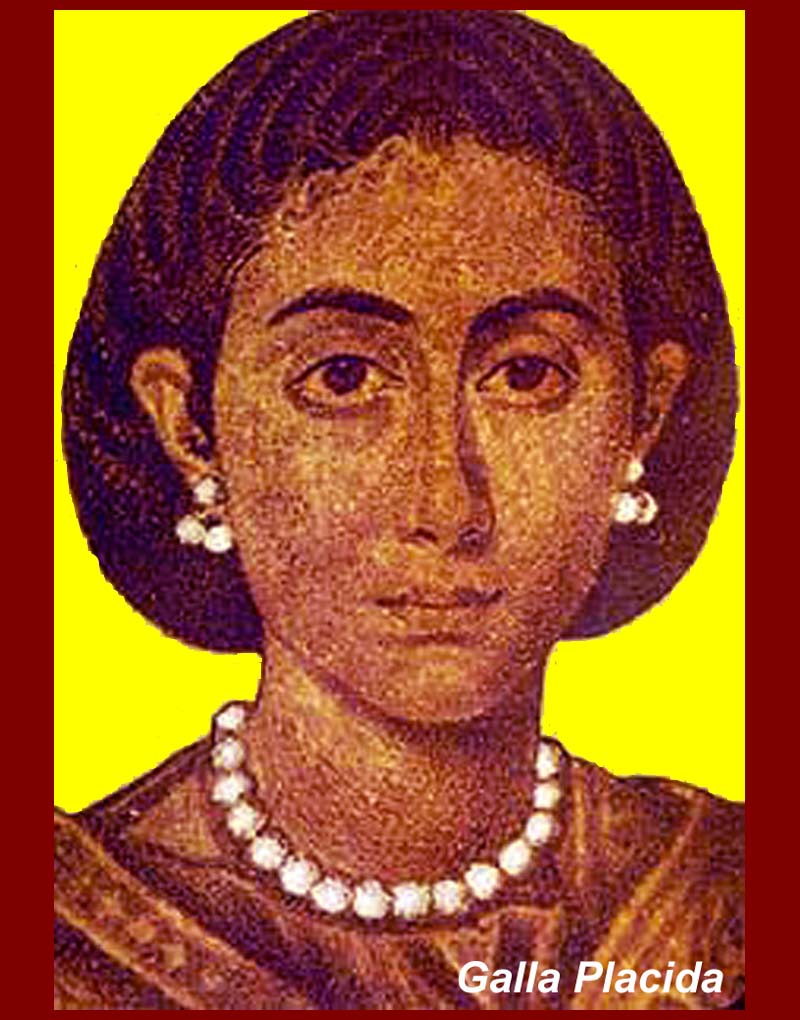 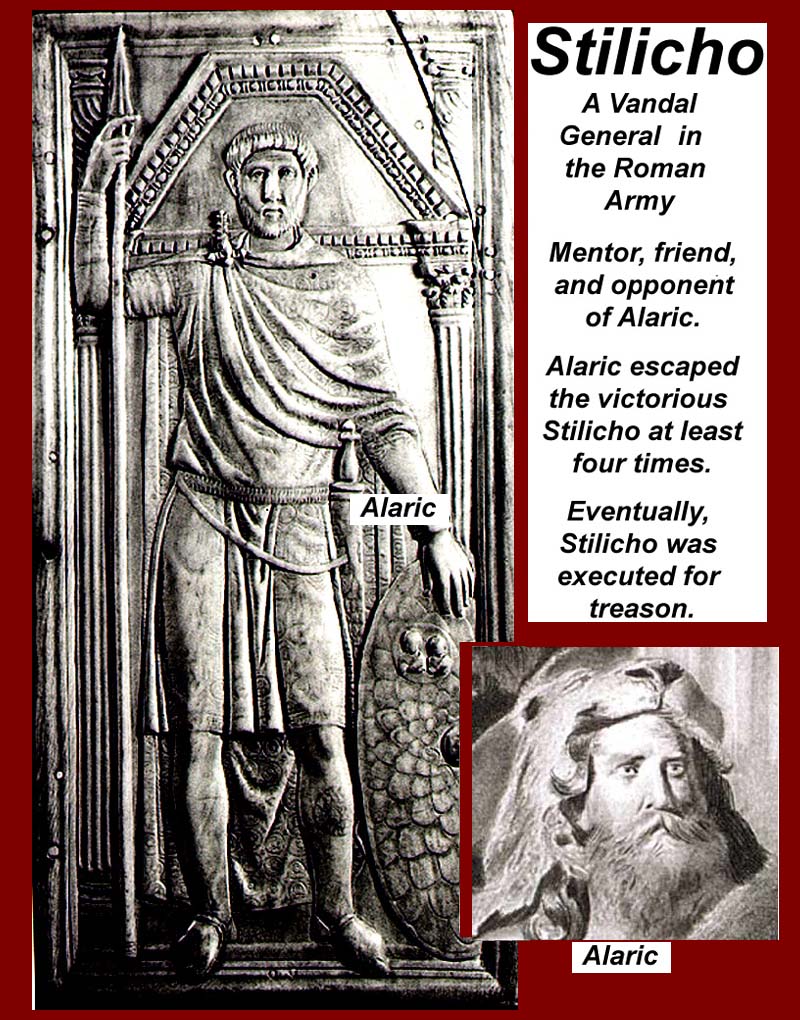 Stilicho and Alaric -- for Alaric's sack of Rome in 410 and his troubled and troubling relationship with Stilicho, see http://www.mmdtkw.org/VAlaric.html. 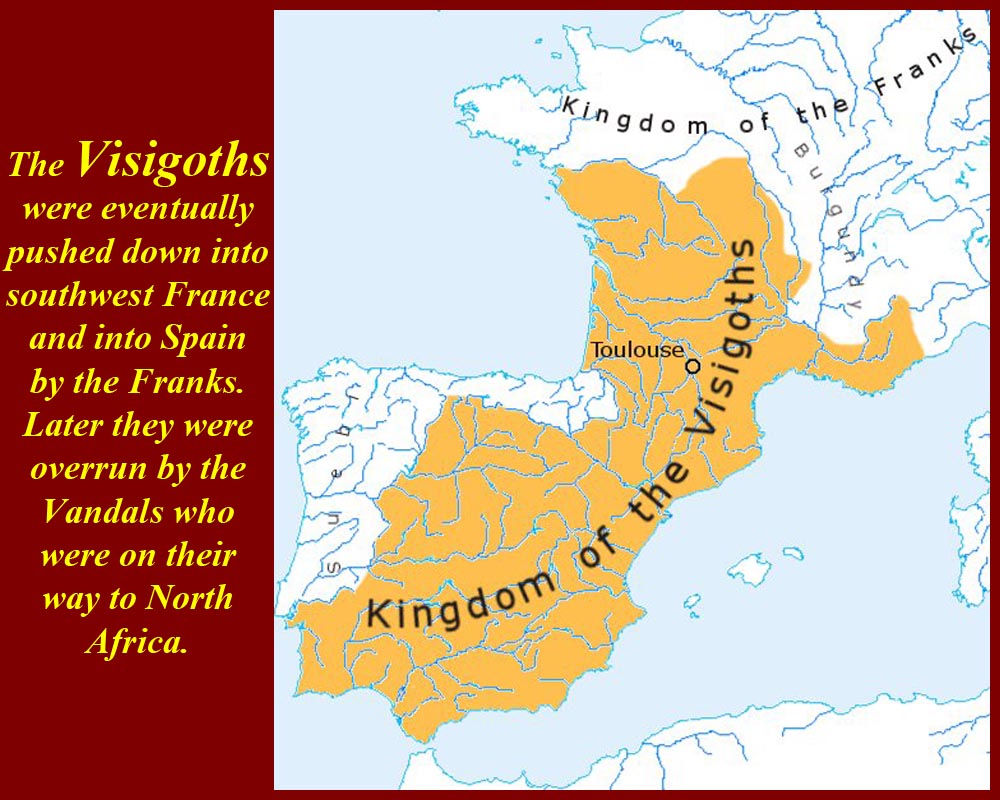 http://www.mmdtkw.org/MedRom0209aVisigothKingdom.jpg
After the Visigoths withdrew from Italy under Atawulf, they settled in France.  Eventually they were pushed into southwest France and into Spain.  They were sometime allies of Rome and for a while absorbed the Vandals into their confederation.  They joined with the Franks and Romans against the Huns at Chalons. 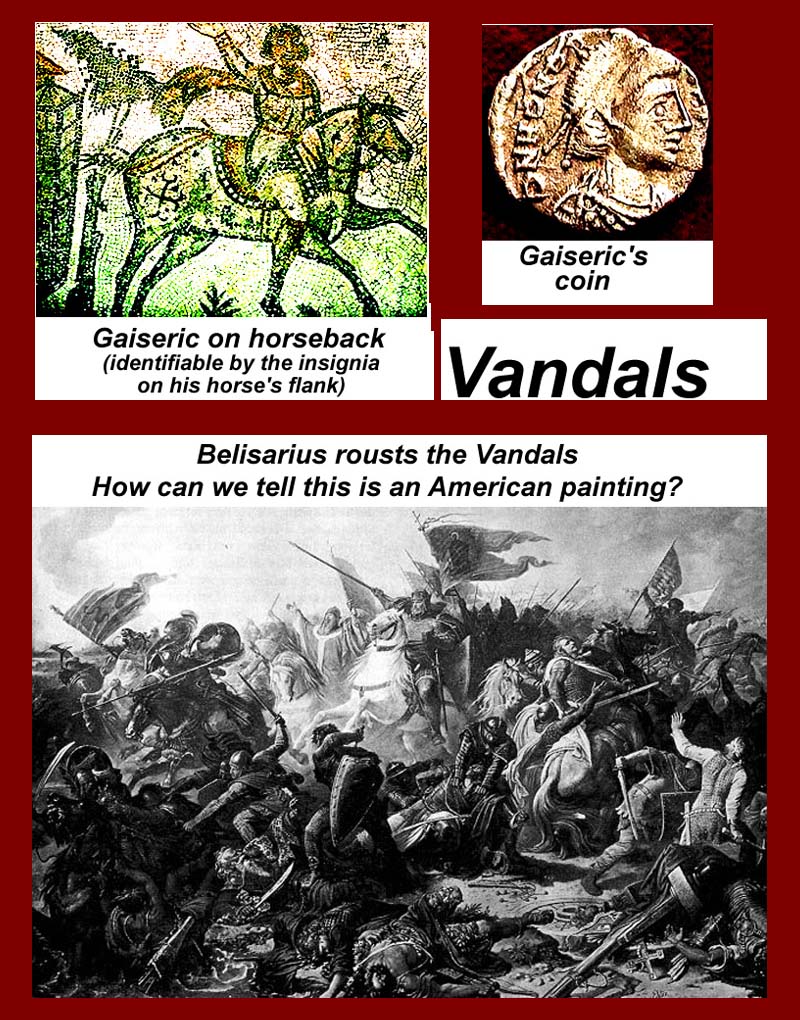 http://www.mmdtkw.org/MedRom0209Vandals.jpg
The general view is that the Vandals were eastern Germanic with, perhaps, an inter-mixture of Slavic groups. A minority view says they came into eastern Germany (Prussia) from some Nordic location.  They were in eastern Germany when they first interacted with Rome in the 2nd century.  They wended their way down through Germany, France, Spain, and then across to North Africa where they finally took Roman Carthage in 435 AD without a fight -- almost everyone was watching the chariot races and the Vandals just walked in.  They then began to raid western Mediterranean shores as pirates and in 455 sacked Rome. In 534, having frown soft ans overly satisfied, the Vandal kingdom in North Africa fell to Belisarius.   See http://en.wikipedia.org/wiki/Vandals for a more complete account of the Vandals. 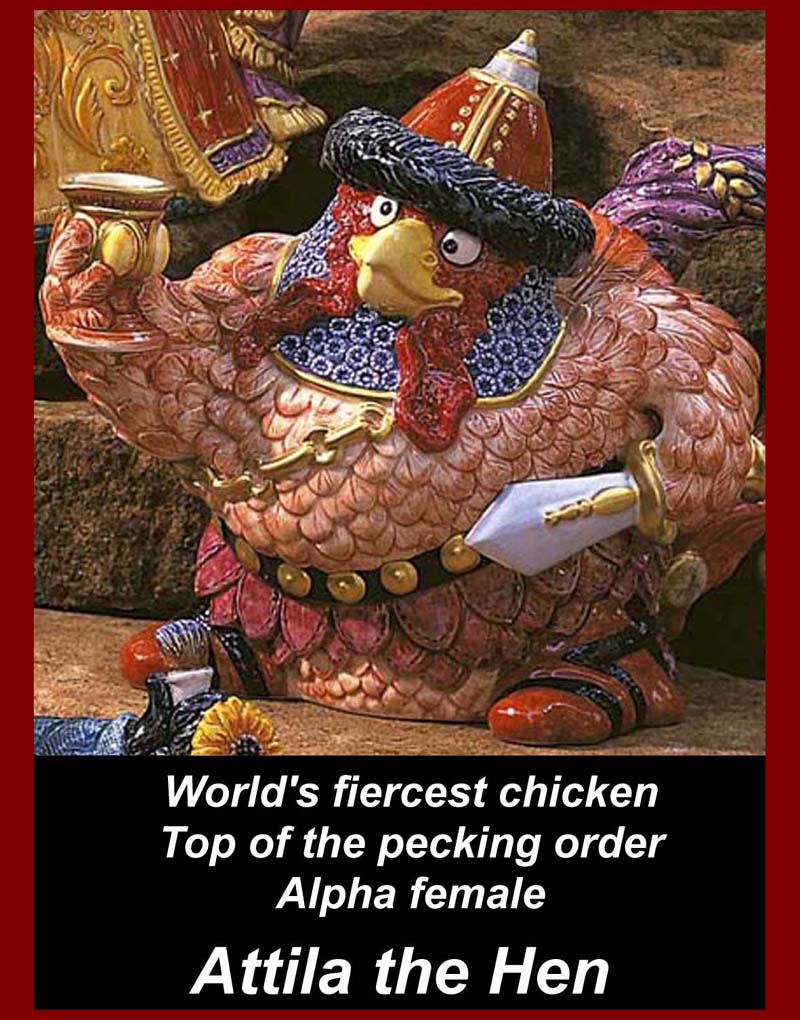 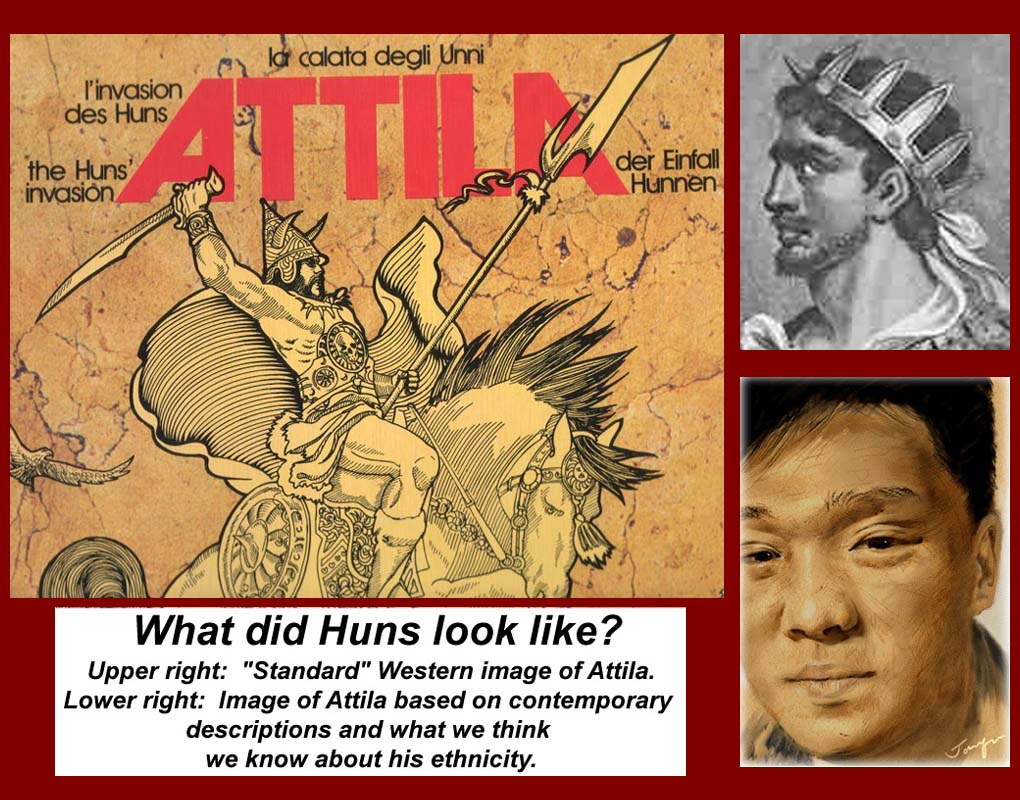 http://www.mmdtkw.org/MedRom0210AttilaFace.jpg
Attila's face -- what did he look like?  Many representations of Attila show him as a European.  From what we know about the history of the Huns and their Avar leadership, it's a good guess that he had Asian features. 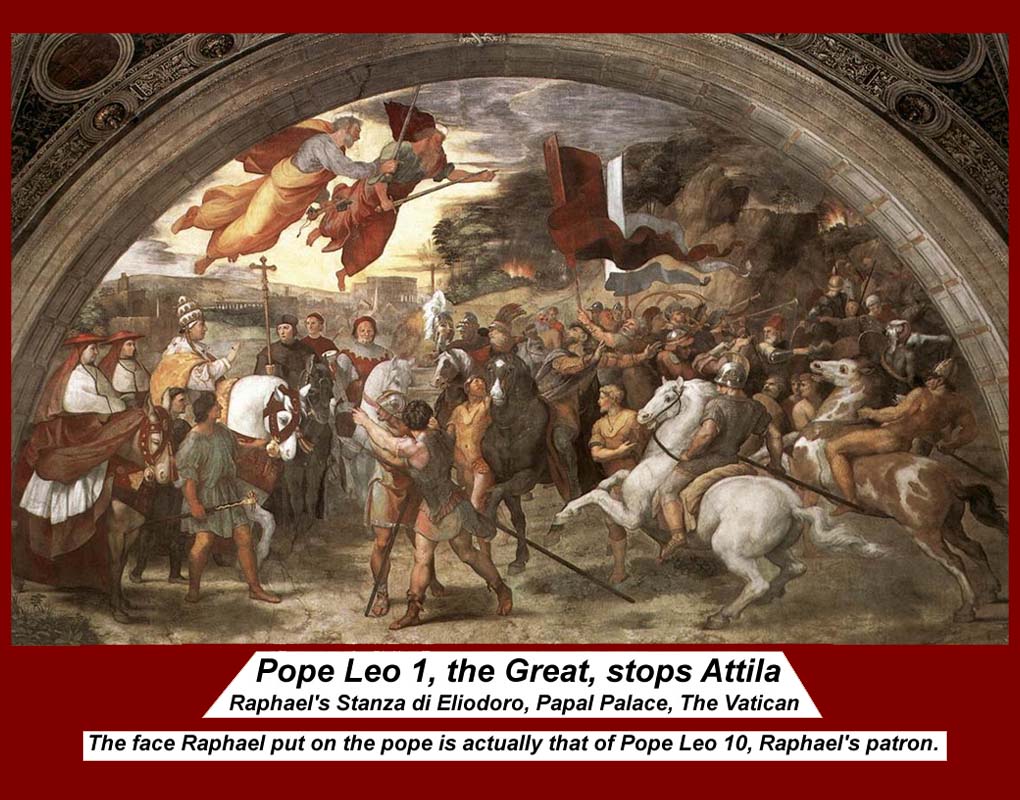 http://www.mmdtkw.org/MedRom0211RaphaelAttila.jpg
After his defeat at Chalons, Attila led his forces down into Italy seeking a softer target.  He terrorized northern Italy including the Venetto where some residents were said to have retreated to the mud banks that later became Venice.  After marauding in the north Attila set his eye on Rome.   Raphael's Attila in the Stanza di Eliodoro in the Vatican palace shows Sts. Peter and Paul flying over the scene of the meeting between Attila and Pope Leo I outside Rome.  According to legend, this frightened off Attila.  Most historians discount the miracle and say a bribe or the nearby presence of Aetius with an army did the trick -- or maybe Attila was superstitious and wanted to avoid the fate of Alaric, who died shortly after sacking Rome.  Leo I got credit for the miracle, but Raphael was clever enough to paint in the features of his sponsor Leo X (Medici) on the image of the Pope.  (Raphael also painted himself, beside he Pope's horse.)
See http://www.fordham.edu/halsall/source/attila2.html. 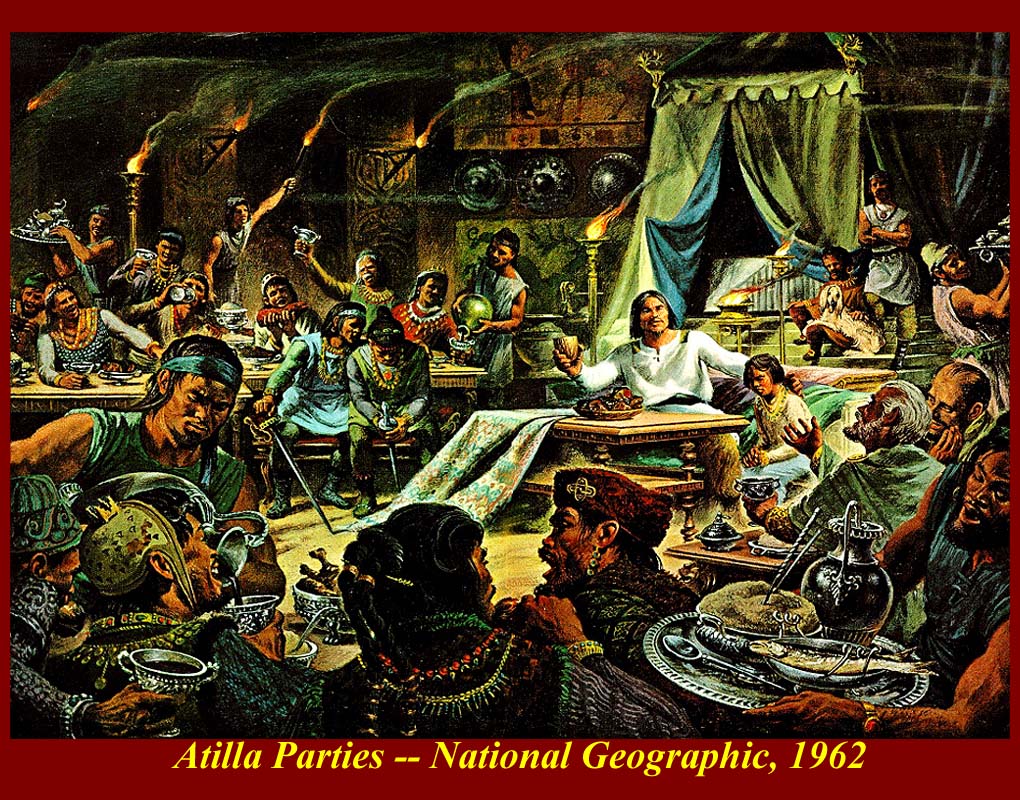 http://www.mmdtkw.org/MedRom0212AtillaParties.jpg
Attila celebrates -- National Geographic 1962.  It was perhaps at a party like this that Attila got the injury that killed him.  After the Huns retreated from Italy, Attila, the story goes, had arranged yet another alliance by an arranged marriage with the daughter of a tribal chief -- one of several such marriages.  At the wedding feast, the story goes, he and a henchman/best man indulged in a ritualized wrestling match for the favor of the bride.  Attila naturally won, but, the story goes, got a nosebleed.  Later that night, he died in the bed of his new bride when the nosebleed recurred -- drowned in his own blood (the story goes).  Other versions have the bride stabbing him to death, because he used her father's skull as a goblet at the wedding feast.  In Verdi's opera Attila, his proposed Italian bride slays him with her father's sword.   Attila had taken over the leadership of the Huns in 434 and died in 453.

Whatever the cause, his death was the signal for the dissolution of the Hunnic confederation of tribes.  An Ostrogoth led away his compatriots, and a Roman/barbarian half-breed led off much of the cavalry.  The half breed was Orestes, who led his cavalry to Ravenna where he offered his services to Western Emperor Julius Nepos.  Julius had no choice but to accept -- and he was soon sent packing and Orestes' young son, Romulus Augustus (aka Augustulus) was set upon the imperial throne.  Romulus Augustulus was the last Emperor of the West and is sometimes called the "Last Roman Emperor".  Odoacer, leading dissident troops, soon dispatched Orestes, who had styled himself Patrician, and he sent teen-aged Romulous packing.  Romulus and his mother started a monastery where they lived out their time in obscurity.  Romulus Augustulus "ruled", under the thumb of his father, from 31 October 475 until 4 September 476.  His deposition by Odoacer traditionally marks the end of the Western Roman Empire, the fall of ancient Rome, and the beginning of the Middle Ages in Western Europe. 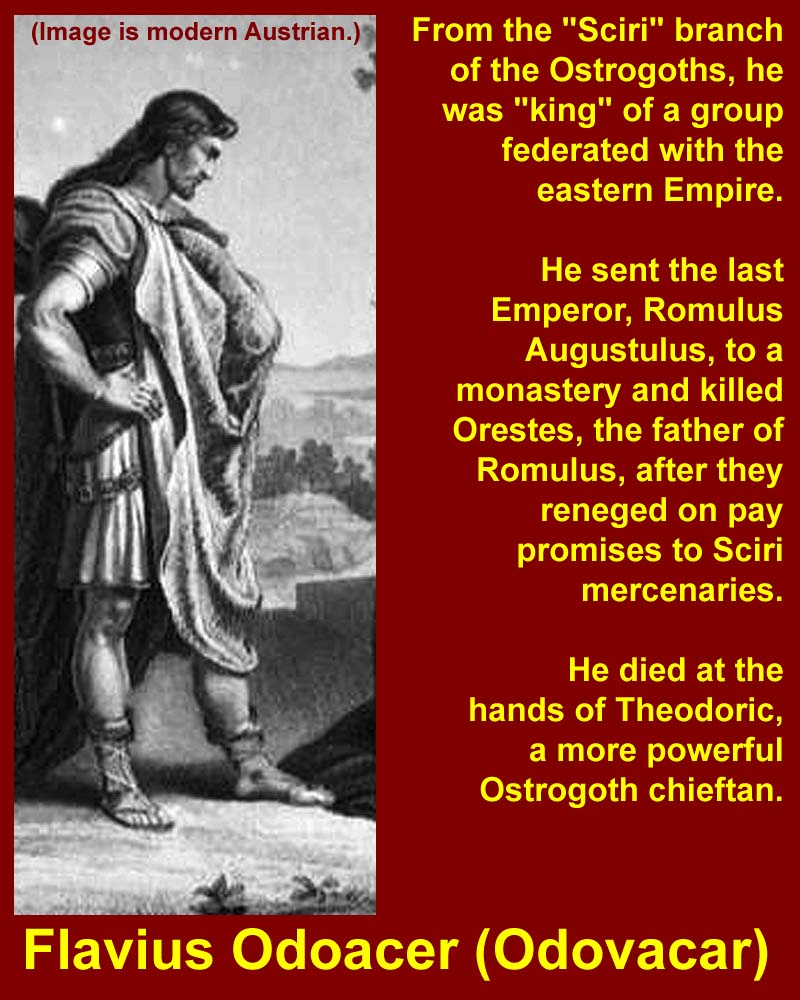 http://www.mmdtkw.org/MedRom0212aOdoacer.jpg
Odoacer, leading dissident troops, soon dispatched Orestes, who had styled himself Patrician, and he sent teen-aged Romulous packing.  Next to arrive was Theodoric.  See  http://en.wikipedia.org/wiki/Odoacer 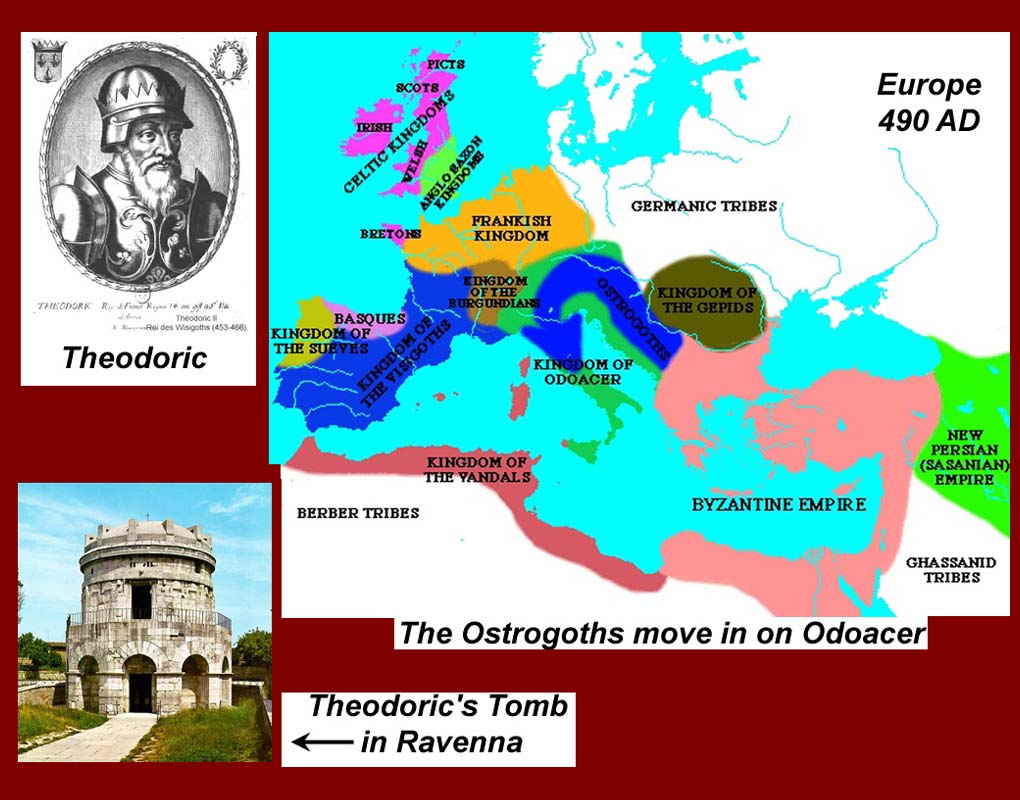 http://www.mmdtkw.org/MedRom0213Ostrogoths.jpg
Ostrogoths.  The Ostrogothic Kingdom established by the Ostrogoths in Italy and neighbouring areas lasted from 493 to 553.  In Italy the Ostrogoths replaced Odoacer, the de facto ruler of Italy who had deposed the last emperor of the Western Roman Empire in 476. The Gothic kingdom reached its zenith under the rule of its first king, Theodoric the Great. Most of the social institutions in the late Western Roman Empire were preserved during his rule.

Starting in 535, the Eastern Roman Empire invaded Italy. The Ostrogothic ruler at that time, Witiges, could not defend successfully and was finally captured when the capital Ravenna fell. The Ostrogoths rallied around a new leader, Totila, and largely managed to reverse the conquest, but were eventually defeated. The last king of the Ostrogothic Kingdom was Teia. 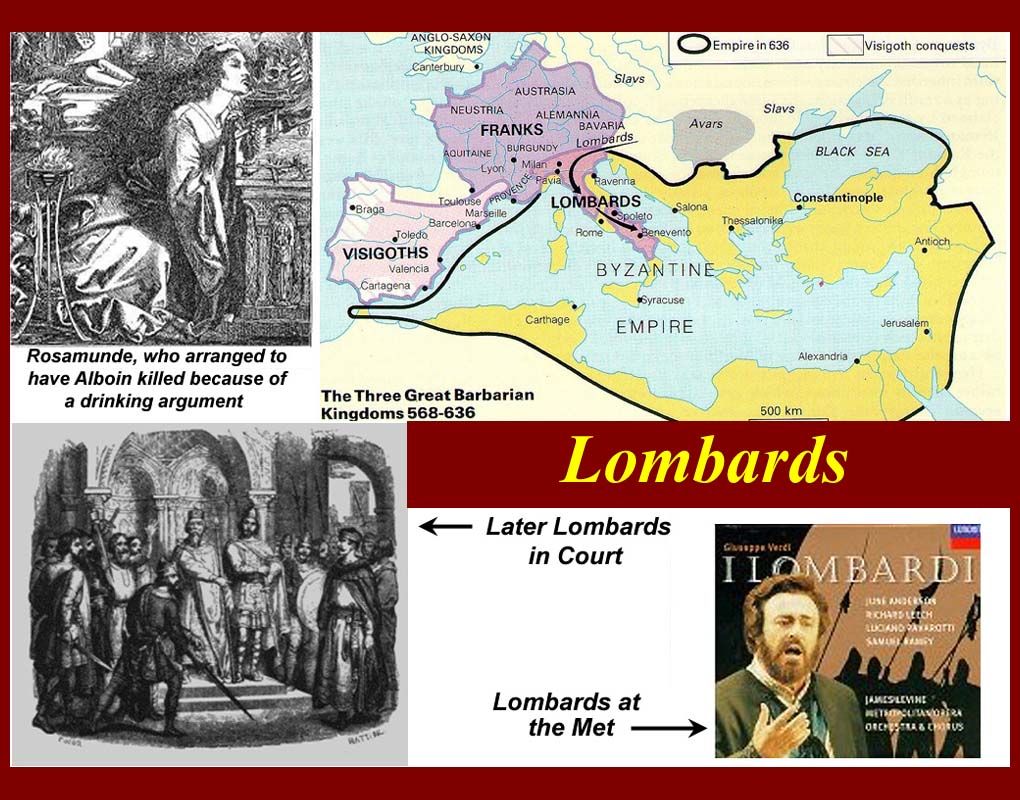 http://www.mmdtkw.org/MedRom0215Lombards.jpg
Lombards in northern Italy.  Alboin (530s – June 28, 572) was king of the Lombards from about 560 until 572. During his reign the Lombards ended their migrations by settling in Italy, the northern part of which Alboin conquered between 569 and 572. He had a lasting impact on Italy and the Pannonian Basin; in the former his invasion marked the beginning of centuries of Lombard rule, and in the latter his defeat of the Gepids and his departure from Pannonia ended the dominance of the Germanic peoples.

After succeeding in gathering together a large coalition of peoples, Alboin began his trek in 568. After crossing the Julian Alps he entered an almost undefended Italy, and rapidly took control of most of Venetia and Liguria. In 569, unopposed, he took northern Italy's main city, Milan. Pavia offered stiff resistance however, and was only taken after a siege lasting three years. During that time Alboin turned his attention to Tuscany, but signs of factionalism among his supporters and Alboin's diminishing control over his army increasingly began to manifest themselves.

Alboin was assassinated on June 28, 572, in a coup d'état instigated by the Byzantines.  It was organized by the king's foster brother, Helmegis, with the support of Alboin's wife, Rosamund, daughter of the Gepid king whom Alboin had killed some years earlier.  The coup failed in the face of opposition from a majority of the Lombards, who elected Cleph as Alboin's successor, forcing Helmegis and Rosamund to flee to Ravenna under imperial protection.  Alboin's death deprived the Lombards of the only leader who could have kept the newborn Germanic entity together, the last in the line of hero-kings who had led the Lombards through their migrations from Elba to Italy.  For many centuries following his death Alboin's heroism and his success in battle were celebrated in Saxon and Bavarian epic poetry. 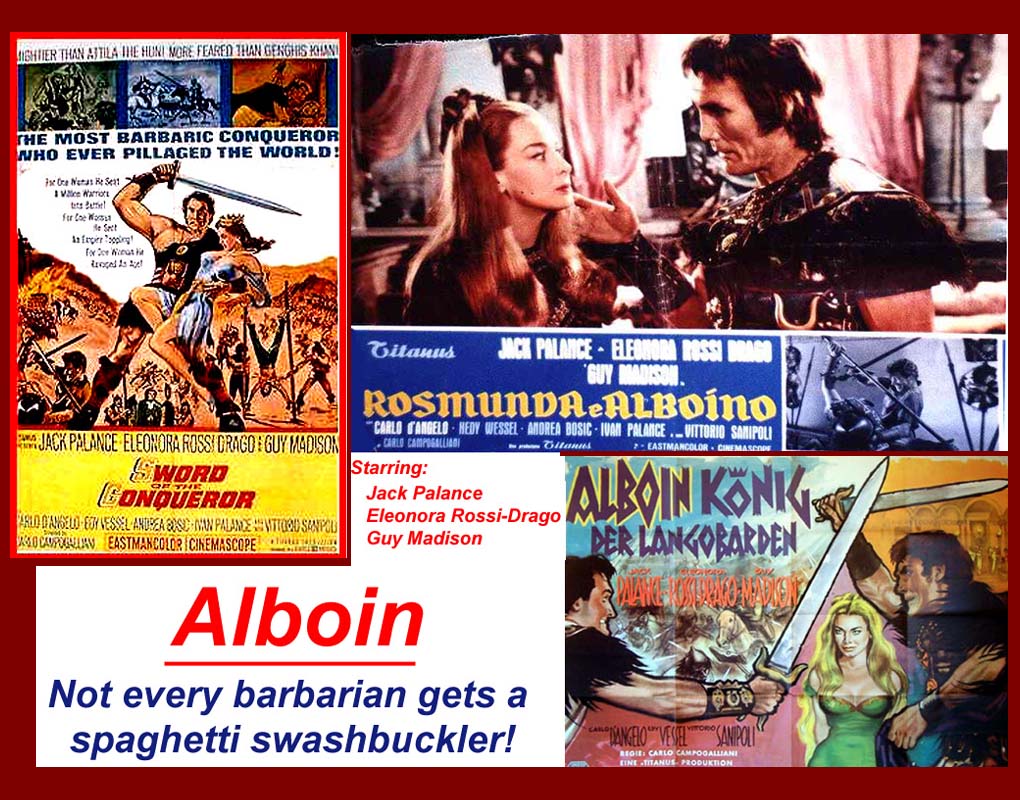 http://www.mmdtkw.org/MedRom0214AlboinMovie.jpg
Alboin's spaghetti western -- although not the only barbarian to get a Verdi opera, Alboin was the only one who got a the spaghetti treatment, with Jack Palance no less. 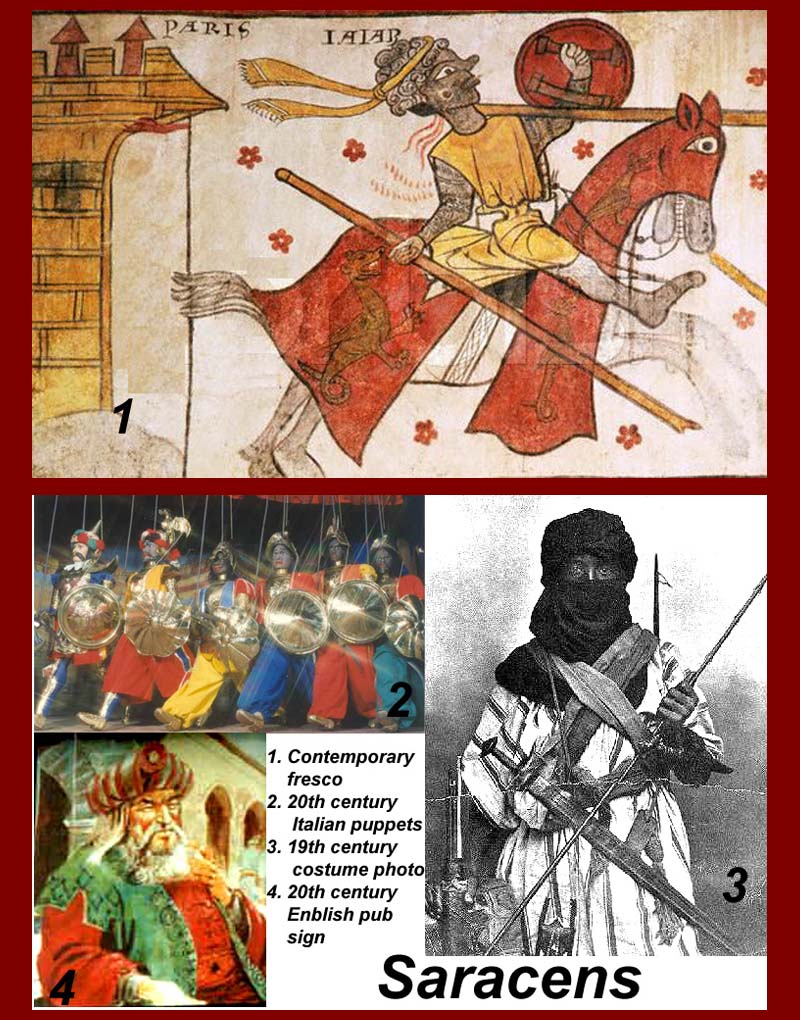 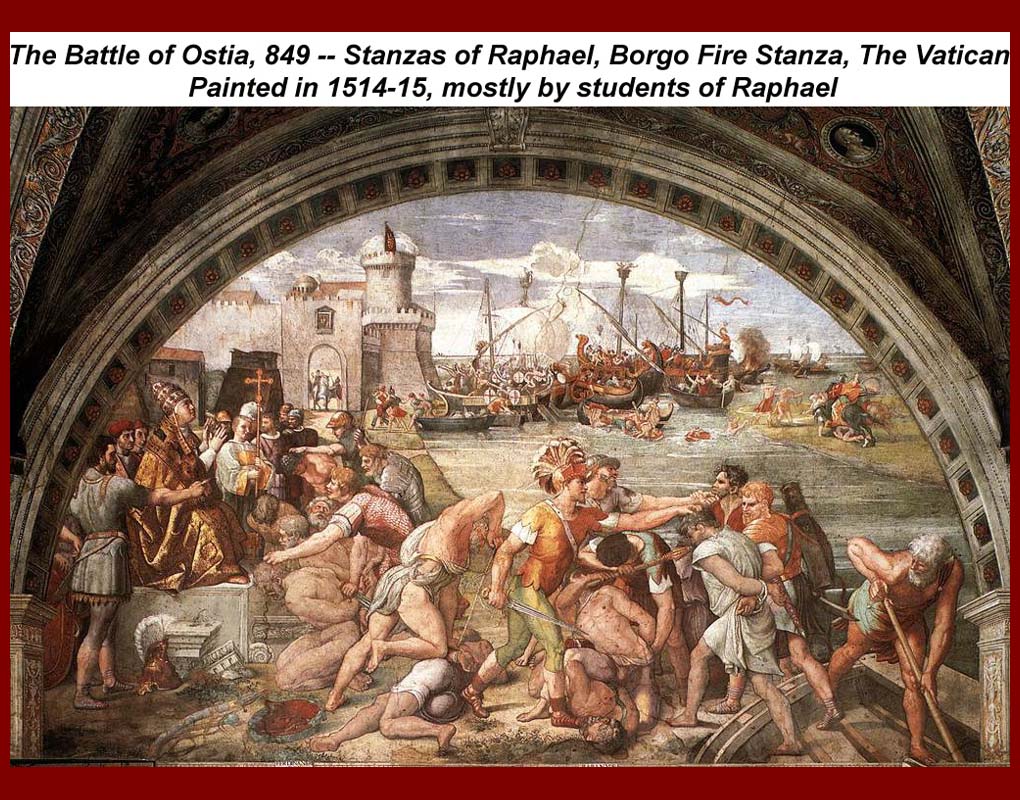 http://www.mmdtkw.org/MedRom0216Saracens.jpg
http://www.mmdtkw.org/MedRom0217OstiaBattle.jpg
Saracens were what the Italians called the Muslim pirates who attacked coastal cities.  During the 8th and 9th centuries, Muslim Arabs had begun to expand aggressively into Southern Italy.  These newcomers, sailing from their bases in North Africa, had conquered Sicily and had begun a steady attack of the peninsula.

The Raphael painting shows the Saracens defeated at Ostia (Raphael Stanze, Vatican).  This heroic image was, of course, after they had already sacked the Vatican and St. Paul's outside the walls in 846.  The losses in gold at the Vatican were particularly large, because the pope had gathered the treasures of the Roman churches there, supposedly for safekeeping.  In the aftermath of the sacks, both the Vatican and St. Paul's were fortified.  See http://en.wikipedia.org/wiki/Leonine_City. 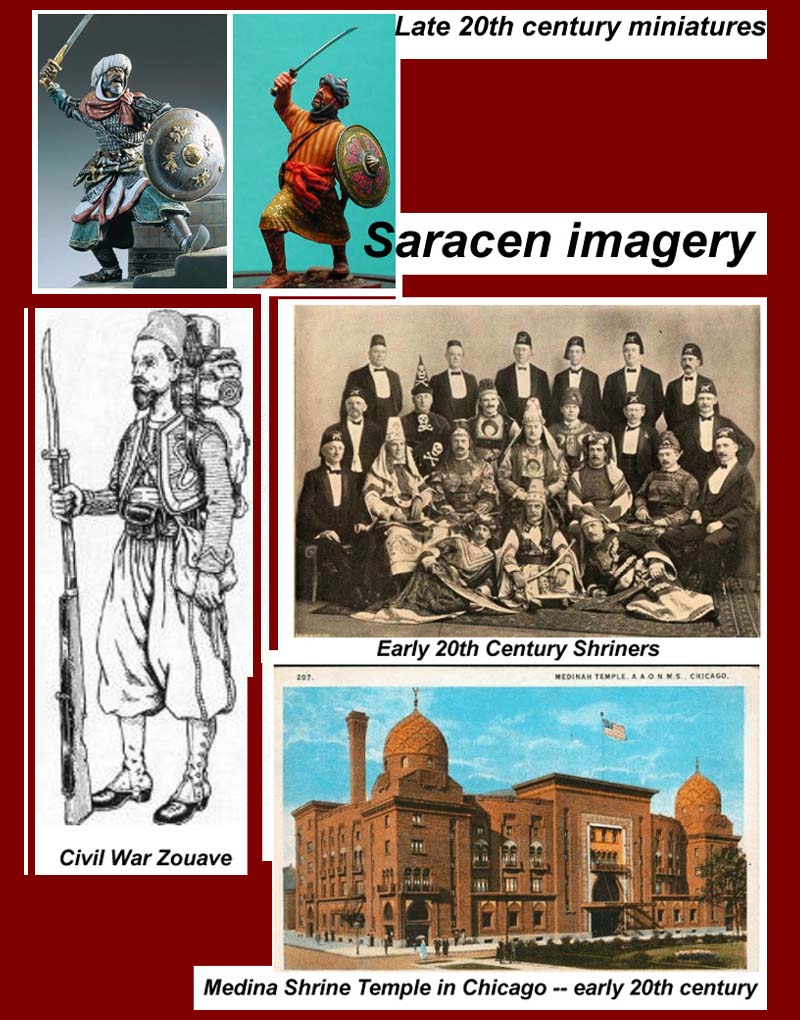 http://www.mmdtkw.org/MedRom0218SaracenImagery.jpg
Saracen imagery in the West -- the romance of the exotic.  Western military and fraternal organizations adopted the look of the Saracens. 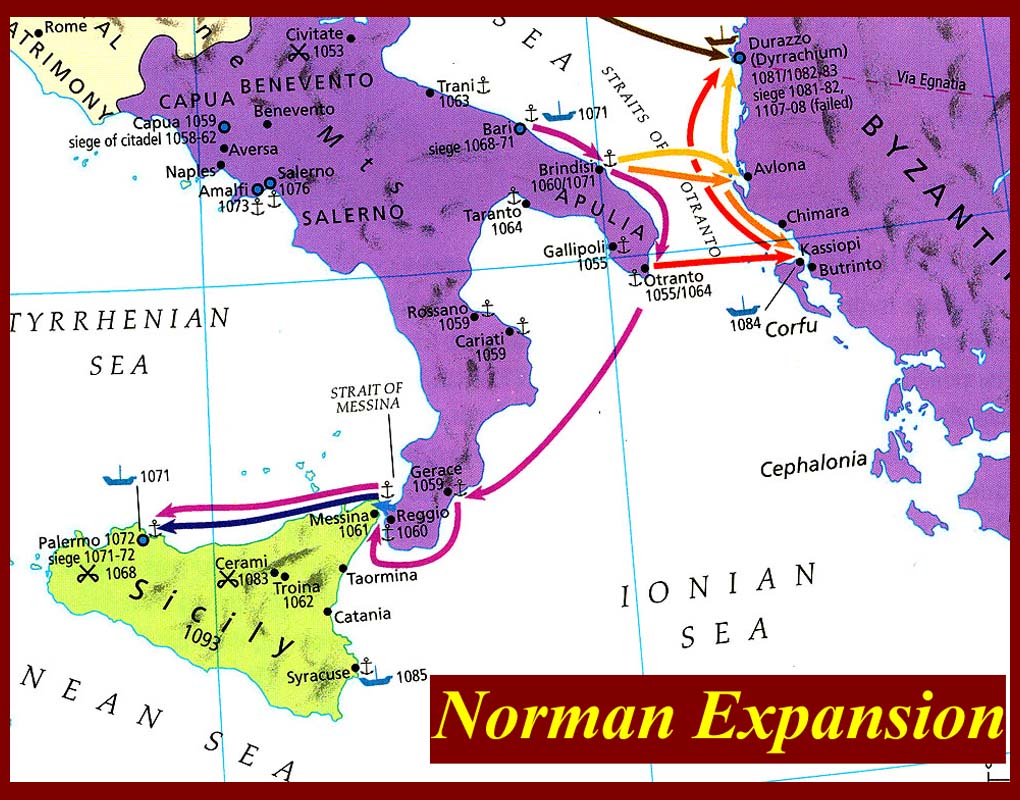 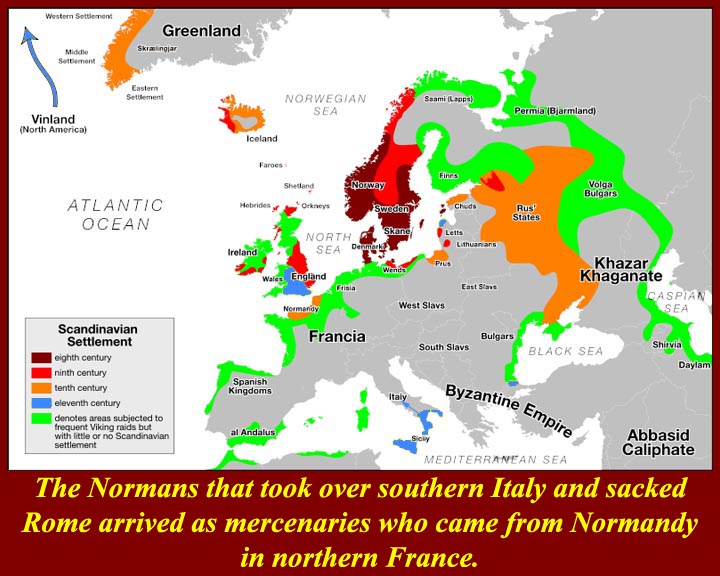 The Sack of Rome of May 1084 was a Norman sack, the result of the pope's call for aid from the duke of Apulia, Robert Guiscard.

Pope Gregory VII was besieged in the Castel Sant'Angelo by the Emperor Henry IV in June 1083. He held out and called for aid from the Guiscard, who was then fighting the Byzantine Emperor Alexius I Comnenus in the Balkans. Guiscard returned to Italy and marched north with 36,000 men.  He entered Rome and forced Henry to retire, but a riot of the citizens led to a three days' sack, after which Guiscard escorted the pope to the Lateran.  The Normans had mainly pillaged the old city, which was then one of the richest cities in Italy.
After days of violence, the Romans rose up causing the Normans to set fire to the city.  Many of the buildings of Rome were gutted on the Capitol and Palatine hills along with the area between the Colosseum and the Lateran (see http://www.mmdtkw.org/MedRom0137-QuatCoronExpan.jpg). In the end the Roman populace succumbed to the Normans.

Our own example, which is probably seen by more people than any other, is the Smithsonian Castle on the Mall in Washington DC.