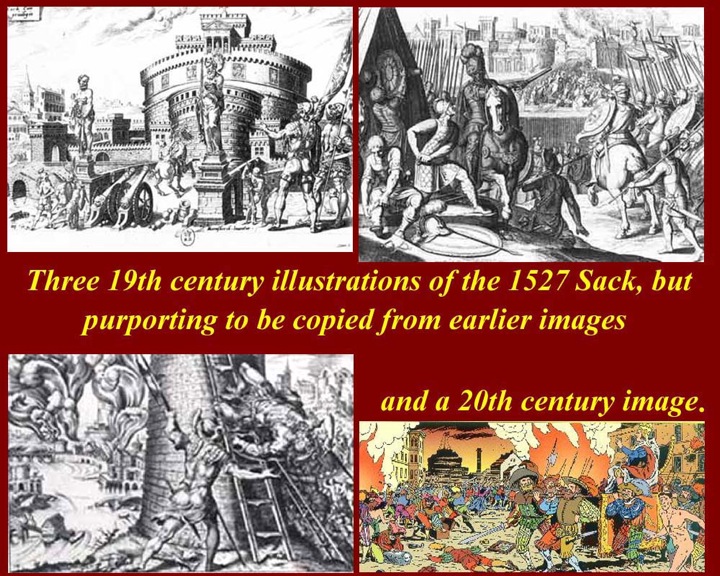 There are games in which the little guys just get run over by the big guys. These are games that small time gamblers should really avoid, but sometimes they can't: the prize might just be everything the little guy owns. And thus we have Giulio de' Medici, the weak and vacillating bastard son of Giuliano, made Pope and swept up in a game with really big players.

When Giulio was born in 1478, his father was already dead in one of the interminable Florentine internecine struggles. He became a ward of his uncle, Lorenzo the Magnificent, was given offices and honors by Lorenzo and then by his cousin Giovanni (Pope Leo X Medici). He was made a Cardinal in 1513, and later, after the eighteen month reign of the ascetic Pope Adrian (Dedel) VI, became the second Medici pope in 1523, taking the name of Clement VII. He has been described as "learned, clever, respectable and industrious, though he had little enterprise and less decision."

Poor Clement was thrown into the arena with Francis I of France, with the Holy Roman Emperor Charles V (AKA Charles I of Spain and ruler of several other places in Europe), with Henry VIII of England, and with Suleyman the Magnificent of the Ottomans, all of whom were whittling away at each other's territories (and they all thought that included Italy). He had neither the army nor the money to compete with these high rollers, who were constantly arranging alliances, breaking them, betraying each other, and then realigning again. A greater man might have stayed a little longer on the tightrope, but that wasn't Clement.

Charles V is often blamed for the sack of Rome, but it was a lot more complicated than that. The shifting pattern of alliances had set up a situation that was dangerous to Rome and the papacy, and bad luck made it even worse. Many volumes have been written about the various players and what happened, but here are the highlights (or maybe lowlights.)

Go back a few years. Francis I had named Charles, Duc de Bourbon (not the same guy as Charles V), as Constable of France, the leader of all the French military forces. The Constable and Francis led some very successful military campaigns in Italy, but they did it on borrowed money. Francis was supposed to pay off the Constable and couldn't, so the Constable eventually switched sides and was made Governor of Milan by Charles V. Thereafter he was known as the Constable de Bourbon. Charles V eventually also ran short of funds and couldn't pay the big, mostly German, mercenary and regular armies that the Constable was running for him in northern Italy.

The Constable allowed his army to sack some northern towns and sent emissaries to Clement VII in Rome saying that he was having trouble controlling his army, and that was true -- they knew Rome was full of treasure. Clement offered 60,000 scudi as "protection money" and it was quickly bumped up to 100,000, but it wasn't really enough money to keep the Germans in the north. They threatened Rome.

Meanwhile, back in Rome, a prelude: family rivalries were bubbling over once again. The Colonna, perhaps in league with the Constable's "negotiators" in Rome, raided the Vatican, causing a lot of damage and carrying off treasure on September 20 of 1526. Pompeo, the Colonna cardinal that organized and led the desecration, lost his See, but he kept the treasure. More about him later.

By spring of 1527, the Constable's army of Protestant mercenaries and Catholic regulars -- ostensibly part of the army of Charles V -- was moving southward. They were bribed to bypass Florence, but the real target they had in mind was Rome anyway. Contemporary reports say that the Constable's forces even abandoned their artillery en route -- they were in a great hurry to get to the loot in Rome -- and that the Constable was almost the army's prisoner rather than its leader.

Clement tried to rally support, but the other big players were either genuinely busy elsewhere or were fed up with Clement's constant vacillation: none of the big boys showed up. He managed to stir up a few hundred poorly armed Romans to defend the city, but they quickly were forced to retreat to the Castel Sant'Angelo, where the artist and general tough guy Benvenuto Cellini had been put in charge of the defenses. They managed to keep the Constable's forces from taking the Castel (partly by throwing statuary down on them), and in the initial attack the Constable took a crossbow bolt (perhaps in the eye) and died quickly. Cellini later claimed to have personally fired the lethal shot, but he was a notorious liar and self-aggrandizer. That was on the 6th of May. While the defenders cowered in the fortress, Rome was looted and burned.

With no leader, the invaders ran riot through Rome. The worst of it lasted eight days, although some authors said that the chaos lasted much longer. The Pope and his meager forces languished in the Castel for almost eight months. During that time the big Roman families, of course, indulged in a lot of reciprocal raiding and revenge killing. The Colonna initially joined in the Sack, but Cardinal Pompeo finally was said to have been sickened by the slaughter -- and certainly he soon began to fear for his own safety. He led the Colonna and their dependents into the Canceleria and established his own defensive perimeter. (Within three years, Clement had forgiven Pompeo and he became viceroy of Naples.)

By the end of summer 1527, 45,000 Roman men, women, and children were gone, either fleeing as refugees or killed in the sack: no one has ever been able to determine the proportion of dead or missing. Rome's population hit rock bottom at about 10,000. Churches, shrines, monuments were looted and destroyed -- only the Sistine Chapel escaped the general looting, because that was where the Constable's body had been taken to lie in state. Contemporary witnesses were unanimous that the Catholic regular soldiers of Charles V as well as the Protestant mercenaries (and many local gang leaders -- i.e., the heads of the big families) had participated in the murder and looting.

So who was responsible. The army that sacked Rome surely belonged to Charles V, but he was far away and everything was way beyond his control. He immediately expressed dismay and regret, and Clement VII eventually found it expedient to forgive him and even to crown him. The official position of the Church is still that Charles was blameless. (French and Italian historians will tell you otherwise.)

Francis I of France was conspiring with Suleyman, trying to set up a simultaneous attack on both ends of the territories of Charles V, and Charles knew it. That's why Charles was too busy and too poor to support the Constable in northern Italy.

Hernry VIII was conspiring with everyone at one time or another, and was seeking favors from Clement (including an annulment of his marriage to Catherine of Aragon) even while Clement was holed up in the Castel Sant'Angelo.

The Italians were not blameless. The Colonna, led by the Cardinal Pompeo, were stealing anything not nailed down and were undoubtedly in league with the enemy. (The Roman Frangipani family, meanwhile, were the agents of Francis I and also his negotiators with Suleyman.) The Medici, led by Clement, had tried to play everyone off against each other and had made everyone their enemy -- at least temporarily. But by 1530, February 24 to be exact, there was Clement crowning Charles V in Bologna, the two having been driven back together by new advances into Europe by Suleyman, by renewed French activity in southern Italy, and by Medici desires to reclaim Florence, from whence they had been driven once again after the Sack of Rome.

My personal bias is to take the word of that artistic wonder and consummate sociopath, Benvenuto Cellini. He claimed he killed the Constable, so let's blame it all on him.

The cast of characters:

Clement VII: http://www.newadvent.org/cathen/04024a.htm (This and other "newadvent" sites below are articles from the Catholic Encyclopedia)

Henry VIII: http://www.newadvent.org/cathen/07222a.htm (seriously biased, but this and the Clement VII new advent site pretty well cover what Henry was up to.)

The roles of others (e.g.: Colonnas, Frangipani, Suleyman) are explained in the sites listed above.

For information on the history and reign of Adrian VI, go to http://www.newadvent.org/cathen/01159b.htm and

http://www.fact-index.com/p/po/pope_adrian_vi.html . (He was the last "pontifice barbaro" prior to John Paul II and famously wrote that it was possible for a pope to err in matters of faith, thus apparently infallibly denying papal infallibility.

P.S.: This was not, by any means, the first time Rome was sacked. The Gauls sacked the town in 390 BC and the Capitoline citadel was only saved by the famous honking Roman geese. The Visigoths under Alaric did it again in 410 AD. Pope Leo I may have talked Attila out of doing it in 452, but he couldn't keep the Vandals out in 456. The Goths did massive destruction in sixth century and the Byzantines (supposedly defenders, but actually fighting over the city with the Goths) weren't much better. When the Goth Vitiges attacked in 537, only the fortress at Hadrian's tomb (Castel Sant'Angelo) held out and its defenders set the precedent for dropping statuary on besiegers. Totila followed Vitiges and he and Belesarius, the Byzantine, swapped control of the city several times with much destruction. Totila sacked the city at least twice. Then the Lombards arrived and they tore up the hinterlands and outlying neighborhoods in 568. The Saracens hit Rome in 846. Factional fighting in the city led Pope Gregory VII to ask Robert Guiscard and the Normans to intervene, and Guiscard, of course, sacked the city in 1084. Numerous destructive battles took place among city factions in intervening years.

You can also make a persuasive case that the Renaissance and Baroque architects later tore down (to fulfill aristocratic and papal commissions) whatever the "barbarians" didn't break. It's a wonder anything is still standing.