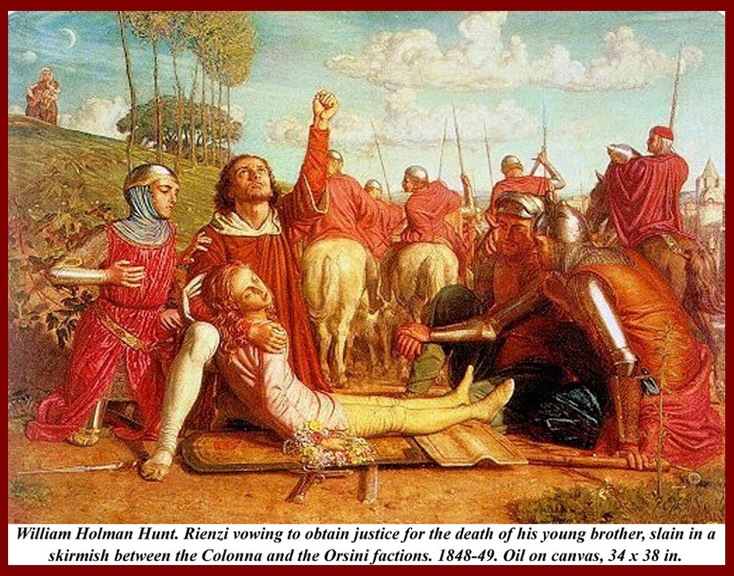 Sometimes a man just goes too far, exceeds his mandates and his skills, gets a bit megalomaniacal, and ends up paying the price. As you climb Michelangelo's ramp to the Campidoglio, tale a glance to the left at the statue about half way up. It's in the grassy space between the ramp and the steeper stairway to S. Maria in Aracoeli Church. The small monument, which is near the place where fate caught up to Cola di Rienzi, doesn't deserve much more than a glance -- it's neither distinguished nor old (put up by Mussolini, a fan and emulator, in all ways, of Rienzi). Few people who have climbed the ramp have even noticed that it is there.

Nicholas Rienzo Gabrini, called Cola di Rienzi, was the son of an innkeeper and a laundry woman. Despite poverty, they managed to give Cola a classical education, which, Edward Gibbon says (in his Decline and Fall of the Roman Empire), was "the cause of his glory and untimely end." Rienzi was a great fan of the classical orators and authors and studied "with indefatigable diligence the manuscripts and marbles of antiquity." He emulated the speaking style of the classical greats, and his rhetorical skills were recognized in foreign diplomatic assignments, in a meeting with Pope Clement VI (in Avignon), and in friendship with the Petrarch, the most famous historian and political theorist of his day. Rienzi's embarrassing poverty was relieved by employment as the Pope's notary in Rome, and the salary was large enough -- five gold Florins a day -- that he could write and speechify at his leisure.

Most of his speeches, delivered in public gatherings on the Campidoglio, emphasized the corruption of the nobles, the needs of the common people, and especially his own honesty and integrity -- always as a representative of the values of ancient Republican Rome. This found a ready audience, because every evil deed and intention he blamed on the nobility was undoubtedly true. The public murder of Rienzi's own brother by a nobleman had gone unpunished, nor was such an occurrence uncommon. Rape of citizens' wives and daughters by noble sons was also a common and justified complaint.

Rienzi became a popular public speaker, pamphleteer, letter writer, and poster artist. Everything had the same theme, and the audiences were enthusiastic. Even the nobles attended his public assemblies, taking them as an opportunity to exchange amongst themselves wry comments and criticisms. He was invited to the Colonna palace to amuse the assembled nobility with his threats and predictions.

And then, on May 20, 1347, he called a "secret" assembly -- the notice was posted on the church doors -- on the Aventine. There he told the commons that he had the support of the Pope, who also wanted to take the nobles down a notch or two. The next night, he (in full armor) and his volunteers, marched forth from the Church of Sant'Angelo to the Campidoglio with the Bishop of Orvieto, a Papal representative, and declared the reestablishment of the Republic. The moment was well chosen: Stephan Colonna, the leader of the nobles, was out of town.

Colonna quickly returned to Rome and threatened to throw Rienzi out of the windows of the Capitol. Rienzi's people sounded the church bells and the mob assembled to protect him. The nobility fled in disarray. The mob wanted to proclaim Rienzi Consul, King, or Emperor, but he chose the more modest title of Tribune -- secure in the knowledge that the commons did not know that a Tribune had no legislative or executive powers.

While it lasted, things were good. There was law and order and everyone -- even the highest of the nobility and clergy -- had to answer for what they did. Rienzi ruled by decree, and many of his laws were liberal and actually passed power back to the people, but his inexperience quickly became obvious. Few cared: the streets were safe, there were no robbers in the forests, and, if there had been trains, they would have run on time. Rienzi became a celebrity at home and abroad. He corresponded with philosophers and kings, wrote political theory and received foreign visitors and emmisaries. Petrarch, who had been the darling of the nobility and the Papacy, now became a public sympathizer with and advisor to Rienzi.

Eventually things started to fall apart, and Rienzi could only keep things going by raiding the municipal and Papal treasuries. This cost him the Pope's support, and the nobility, of course, had always hated him. And the pressure just got to be too great for Cola. As Gibbon says, "his virtues were insensibly tinctured with the adjacent vices; justice with cruelty, liberality with profusion, and the desire of fame with puerile and ostentatious vanity". He took for himself ostentatious titles, fur-lined satin and velvet robes, a massive scepter, a white steed, trumpets, drums, parades and processions, and a praetorian guard. Gold and silver coins were scattered in his wake. He had himself crowned with seven successive crowns, received the knighthood in the "Order of the Holy Ghost" and, what was most scandalous to the people, bathed in the porphyry basin in which Constantine was reputedly cured of his leprosy by Pope Sylvester. The bath, even greater scandal, was in the baptistery of St. John Lateran. As a final straw, he publicly commanded the Pope (Clement, still in Avignon) and various royalty, electors, and nobility to come to Rome to surrender to him the various parts of the Roman Empire that they had usurped. Meanwhile, he was indulging the princely and Papal vice of nepotism -- all the Rienzis soon had good jobs.

The nobles, after humiliation, mock trials and last minute reprieves from execution, finally organized themselves into a rebellion. Their first attempt to retake the city resulted in their ignominious defeat, and many important nobles were slain by the citizen defenders of Rome. Rienzi took this as a validation of his megalomania. But when he tried to institute a new tax it was widely opposed in the city -- the people were tired of paying for his excesses. The Pope was also disenchanted, and after fruitless negotiations, the Cardinal Legate (the Pope's Ambassador) excommunicated Rienzi and accused him of rebellion, sacrilege, and heresy -- the big three in Papal condemnations.

The Nobles were still cowed after their early defeat, but one desparate character, the Count of Peperino (who had just been released from prison through the efforts of Rienzi's friend Plutarch) infiltrated Rome with one hundred and fifty soldiers. They took over the old Colonna palaces quite easily, and, when the big bell on the Capitol rang the alarm, nobody came to defend poor Cola. Cola ran for cover but was caught and imprisoned in the Castel Sant'Angelo, and the nobles retook the city.

The nobles also had learned nothing from their experience and quickly reestablished their reign of terror in Rome and the countryside. Seven years later, Rienzi escaped from his formidable prison -- there must have been inside help -- and began to wander Europe showing up in the most unexpected places, including, finally, the court of Emperor Charles IV, who immediately had him arrested and transferred to Papal custody in Avignon -- he was confined but comfortable. The succeeding Pope, Innocent IV sent him back to Rome, either because he believed in Rienzi's message, or, according to revisionists, because he wanted to cause mischief.

Rienzi was received again in Rome in 1354 as a redeemer -- the mob turned out and proclaimed that his laws and decrees were reinstated. The noble were forced to flee again. Rienzi's second reign lasted four months. Reinzi was seized in a bloody melee organized by the Barons and displayed on the balcony at the Capitol. After about an hour of indecision, with the mob looking on, the first dagger blow hit him in the chest, probably killing him immediately. Numerous other blows followed and finally, according to Gibbon, his body "was abandoned to the dogs...and to the flames".

Edward Bulwer-Lytton's famous 1835 novelization:
http://www.gutenberg.org/etext/1396
Warning! Bulwer-Lytton, who also wrote The Last Days of Pompeii, is well known for his ponderous writing style. Much of his modern fame rests on the fact that he started another of his novels, Paul Clifford, (1830) with the famous sentence, "It was a dark and stormy night." See http://www.bulwer-lytton.com/
-----------------------
updated December 4, 2009