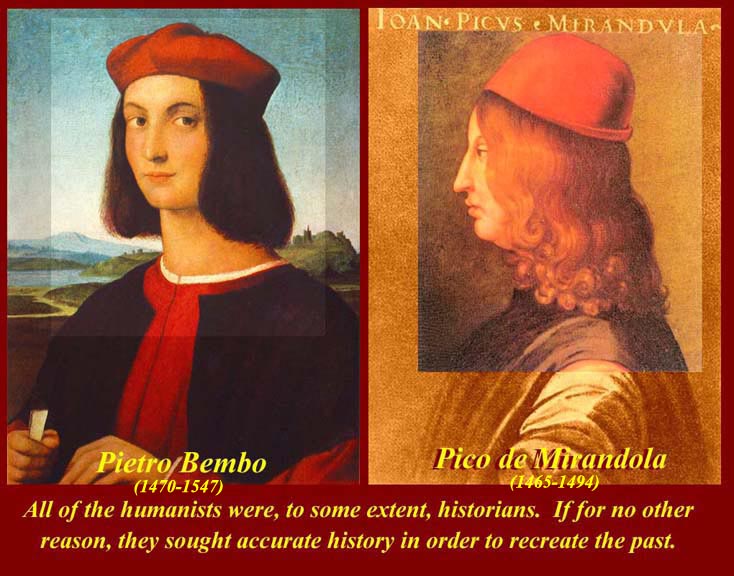 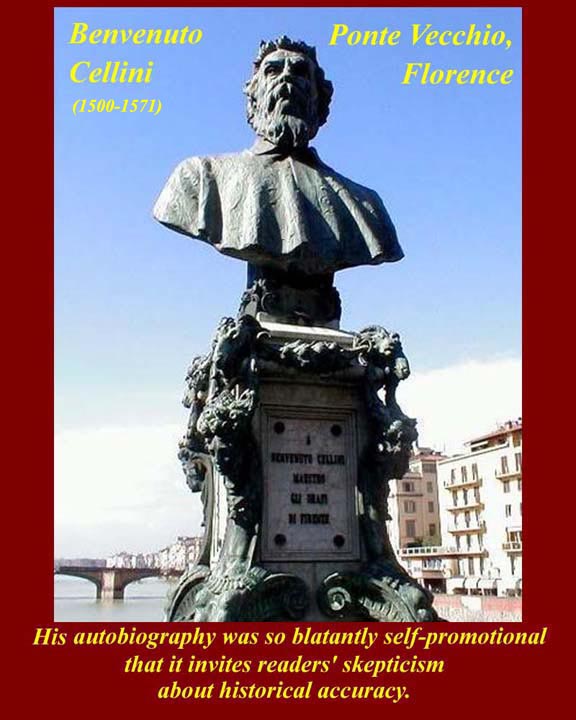 http://www.mmdtkw.org/RenRom0902-CelliniSkepticis.jpg
Benvenuto Cellini's self promotion invites skepticism about anything he wrote in his autobiography. 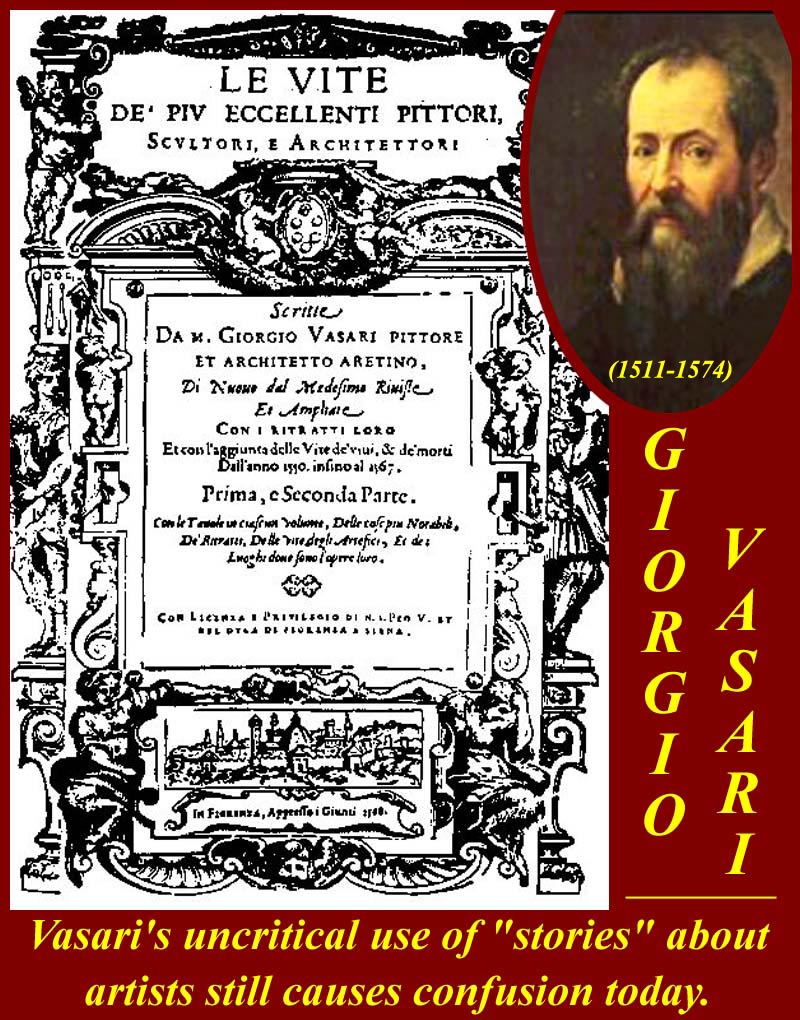 http://www.mmdtkw.org/RenRom0902a-VasariUncritica.jpg
Giorgio Vasari's uncritical use of unverified/unverifiable source information and his propensity for ignoring or at least belittling anything that didn't originate in Florence gives us problems in assessing his Lives. 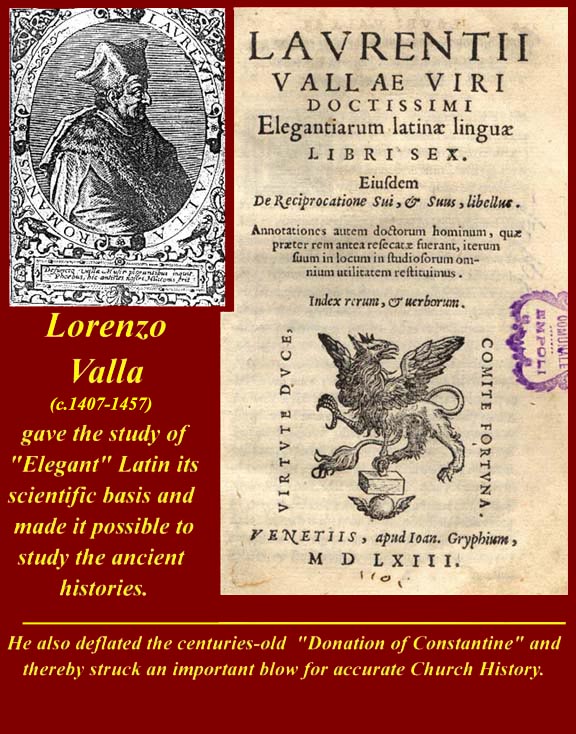 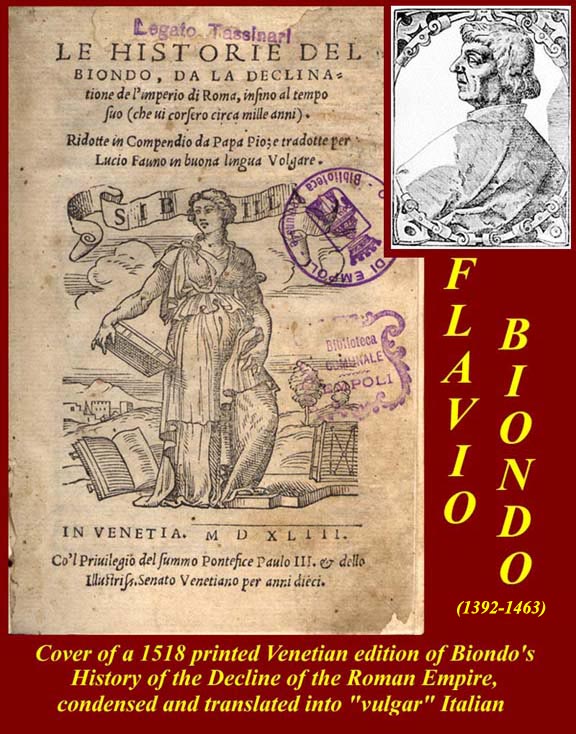 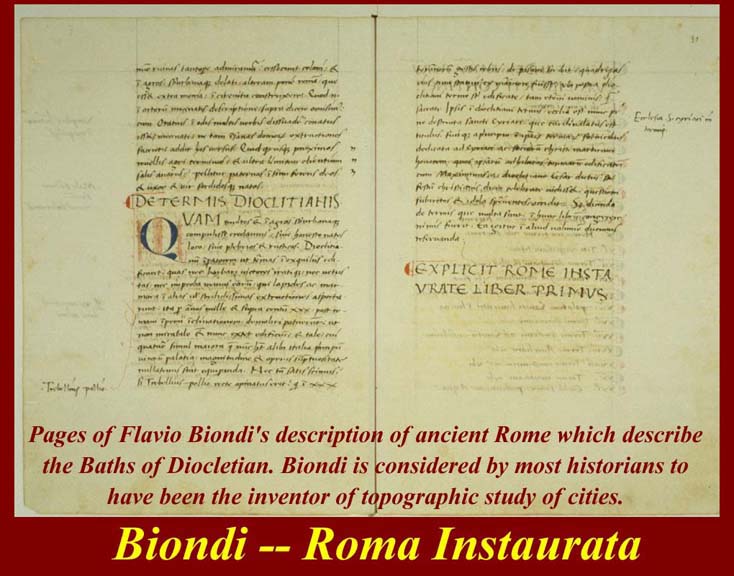 http://www.mmdtkw.org/RenRom0904-BiondoHistory1.jpg
http://www.mmdtkw.org/RenRom0905-BiondiRomaInstau.jpg
Flavio Biondo's history from the decline of the Roman Empire until his own time was a fairly successful attempt to fill in gaps in the record between Constantine and the early Renaissance.   Biondo also invented the Renaissance discipline of urban topography with his Roma Instaurata. 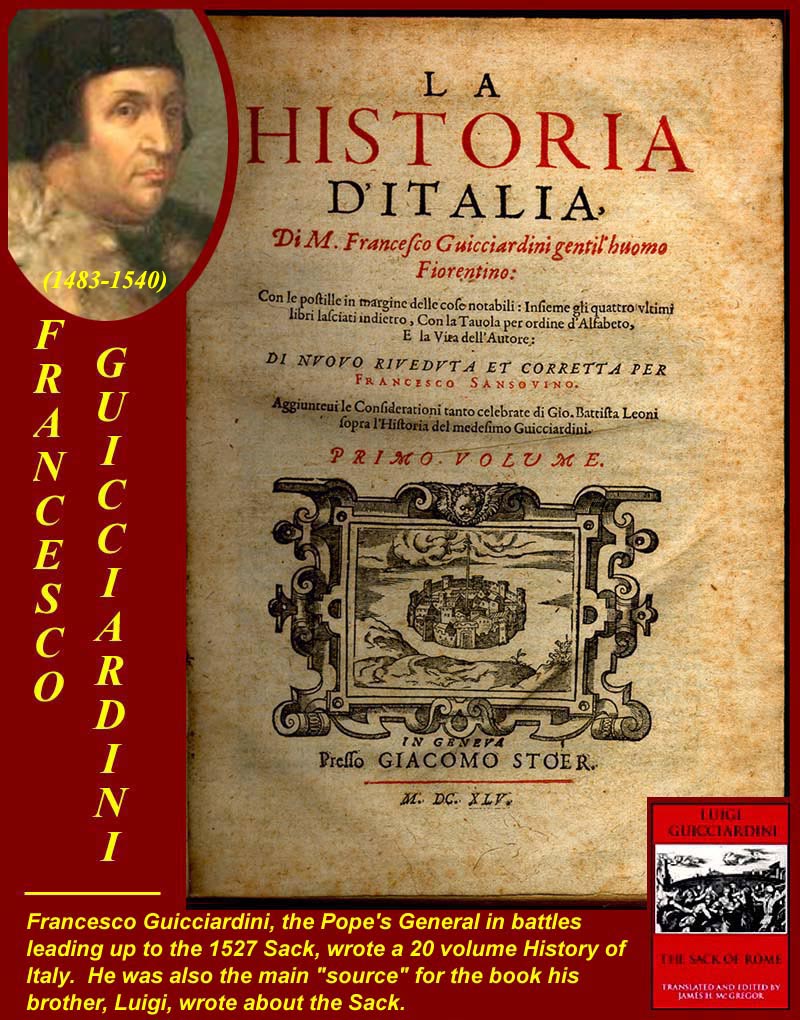 http://www.mmdtkw.org/RenRom0906-Guicciardini.jpg
Francesco Guicciardini wrote a twenty volume History of Italy and was the main "source" of information of his brother Luigi's contemporary account of the Sack of Rome.  (An English translation if Luigi's account, by Professor James H. McGregor, is now available.) 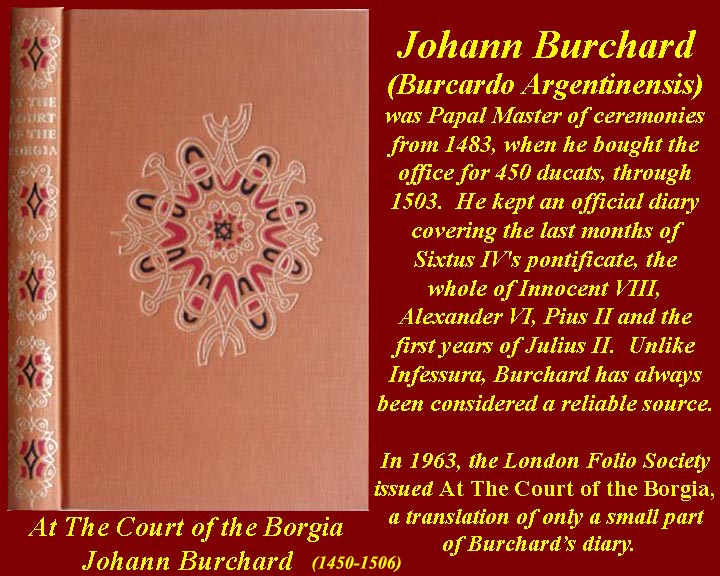 http://www.mmdtkw.org/RenRom0906a-BurchardDiaary.jpg
Johann Burchard was the papal Master of Ceremonies from 1483 through 1503 when he died.  He was the keeper of the papal ceremonial schedule and kept a diary of events for the last few months of the pontificate of Sixtus IV, the whole of those of Innocent VIII, Alexander VI, and Pius II, and the first years of the pontificate of Julius II.  The whole of Burchard's diary is in the Vatican Library, and it is considered to be an authoritative source of papal history of its time.  The Image shows an English language edition of part of his diary, concerning only the pontificate of Alexander VI Borgia, issued by the London Folio Society in 1963 and reissued in 1993. 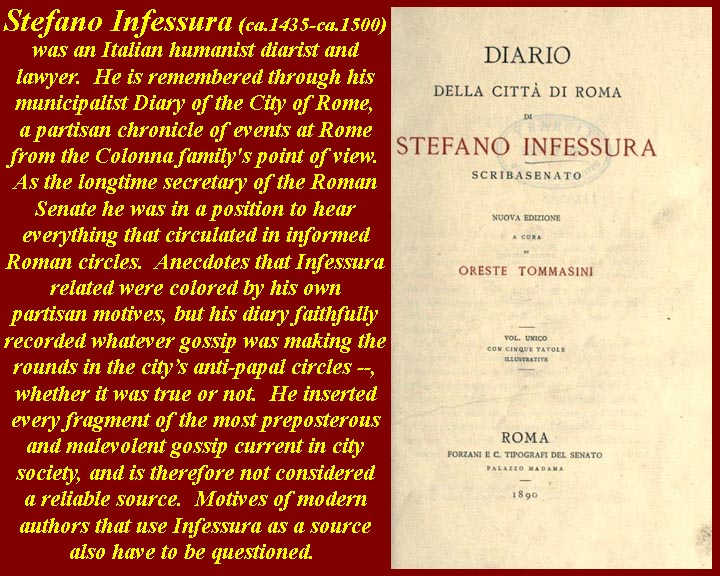 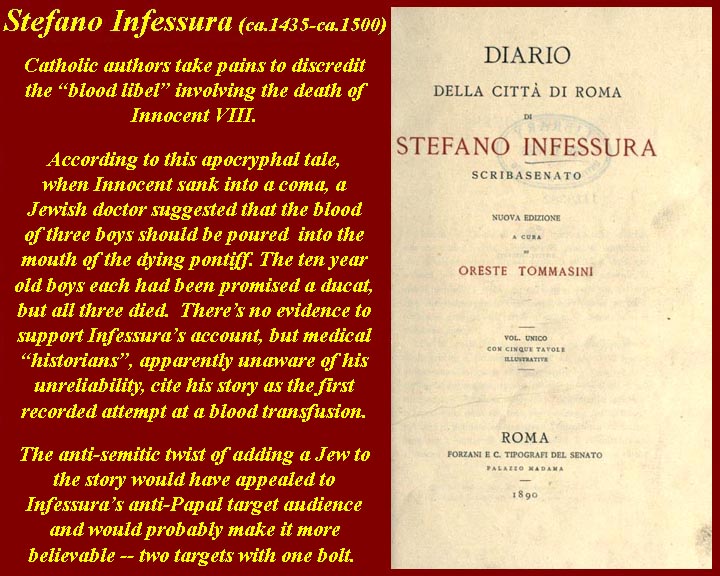 http://www.mmdtkw.org/RenRom0906b-RenInfessuraDiario1.jpg
http://www.mmdtkw.org/RenRom0906c-InfessuraDiario2.jpg
Unlike Burchard, Stefano Infessura's reputation for accuracy is notoriously bad.  He was in the pay of the Colonna family, who were mortal enemies of the Borgias, and did everything possible to blacken the name of the Borgia popes.  This included reporting any gossip, rumors, or outright lies as fact in his own diaries.  His inaccuracy has been known for centuries, and any later authors who relied on his accounts of goings on in the papal court were either woefully ignorant or willfully were trying to defame the Catholic church. 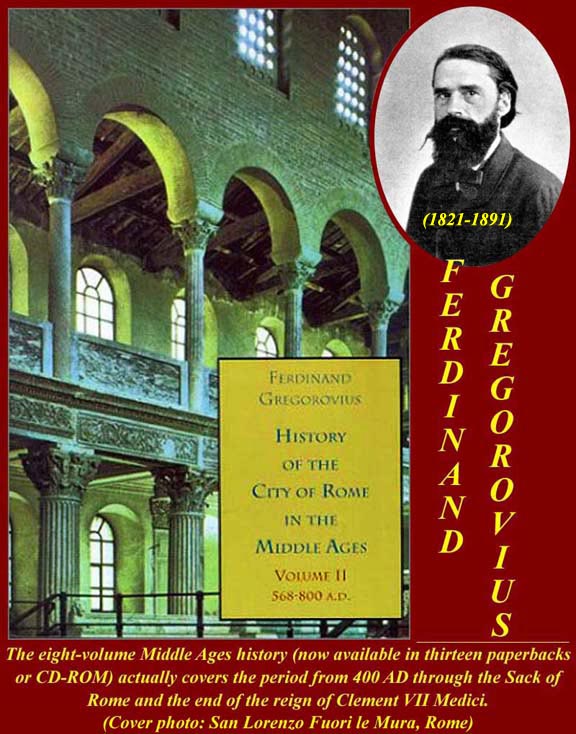 http://www.mmdtkw.org/RenRom0907-HistoryGregorovi.jpg
Ferdinand Gregorovius published an eight volume History of  The City of Rome in the Middle Ages but defined the middle ages as the period between 400 AD and 1534 AD.  So his history actually includes Rome's "high renaissance" and the Sack of Rome. 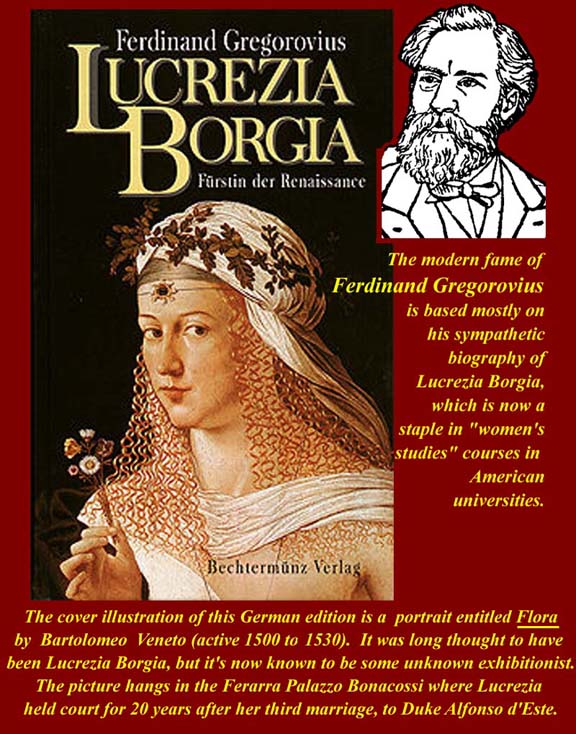 http://www.mmdtkw.org/RenRom0908-LucreziaGregorov.jpg
Gregorovius also wrote a sympathetic biography of Lucrezia Borgia, which is now a standard text in "women's studies" courses.  The full text of the John Leslie Garner English translation is available free on the Internet at https://archive.org/details/lucretiaborgia00greg. 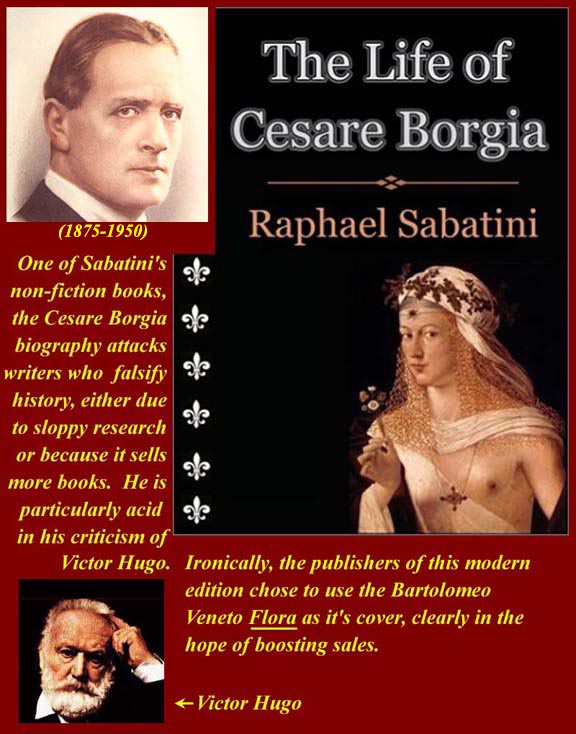 http://www.mmdtkw.org/RenRom0909-SabatiniBorgia.jpg
Raphael Sabatini was most famous for swashbuckling novels and for Errol Flynn movies (Sea Hawk and Captain Blood -- and don't forget Stewart Granger in Scaramouche).  But he also wrote one of the best biographies of Cesare Borgia, the introduction of which excoriates authors of "historical fiction" for not clearly delineating the historical and the fictional.  He specifically condemned Victor Hugo's inaccurate treatment of the Borgias.  The full text of the Sabatini Life of Cesare Borgia is available on the Internet at http://www.gutenberg.org/etext/3467. 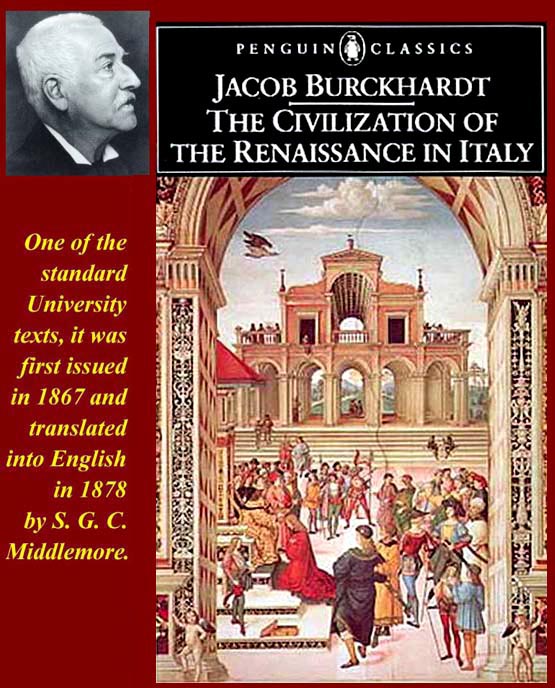 http://www.mmdtkw.org/RenRom0910-BurckhardtTextbo.jpg
Jacob Burckhardt, a Swiss historian, wrote a The Civilisation of the Renaissance in Italy in 1878 that is still used as a textbook in many Universities.  A full text English translation is available on the internet at http://www.gutenberg.org/ebooks/2074. 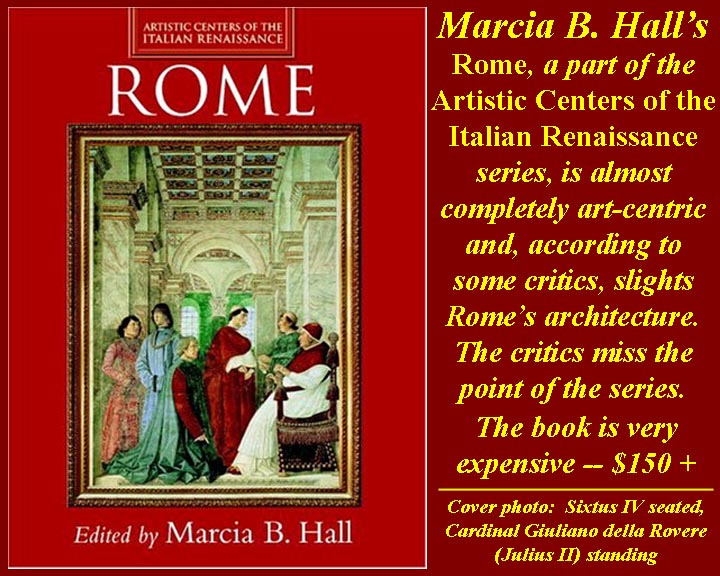 http://www.mmdtkw.org/RenRom0910a-MarciaHallRomeArt.jpg
Marcia B. Hall's Rome is part of the Artistic Centers of the Italian Renaissance series, and, as such, it concentrates on the art of the period in Rome.  Some reviewers have complained that it does not cover Roman renaissance architecture deeply enough, but such criticism can be dismissed simply by remembering that the series deals with art, not architecture.  The book, which costs about $195 (new -- used from $95), is well beyond the means of many casual readers. 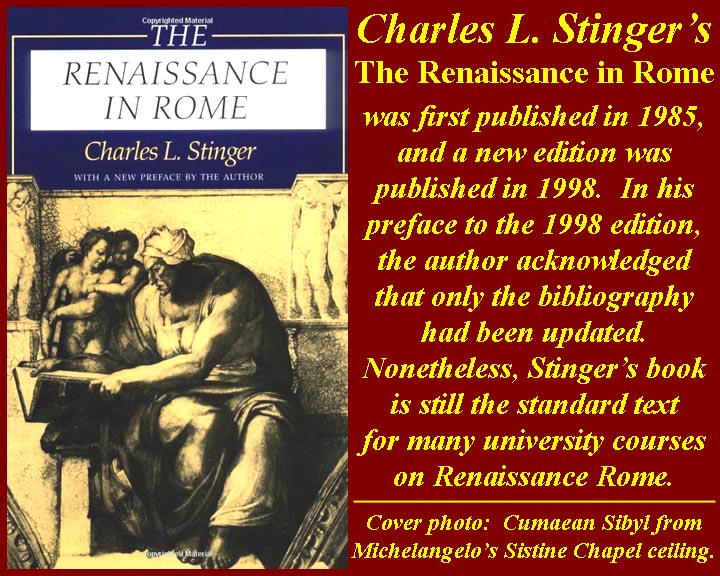 http://www.mmdtkw.org/RenRom0910b-StingerRenaissanceRome.jpg
Charles L. Stinger's The Renaissance in Rome was first published in 1985 and a new edition appeared in 1998.  The author acknowledges in his second edition forward that no changes have been made to the text, but the very useful bibliography was updated to reflect newer research.  Despite its age, the Stinger book is still a standard university text. 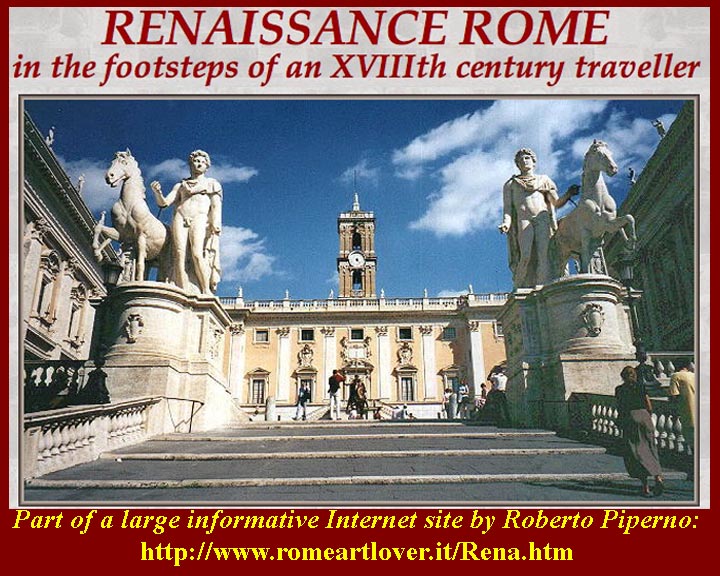 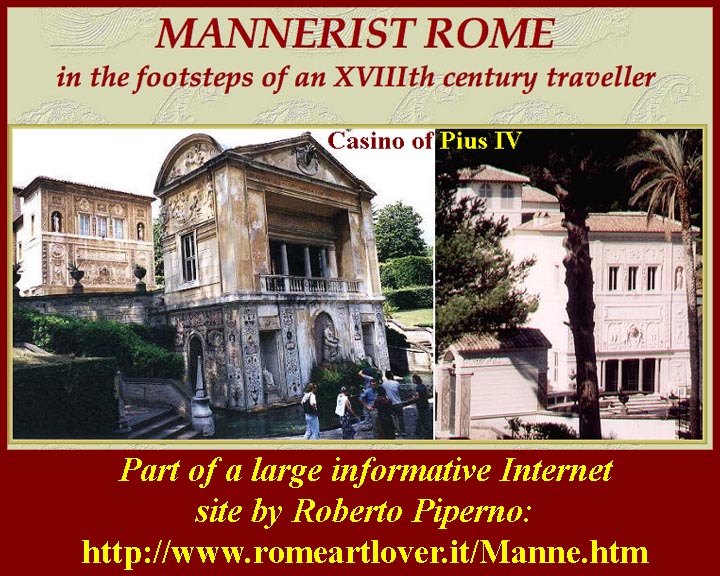 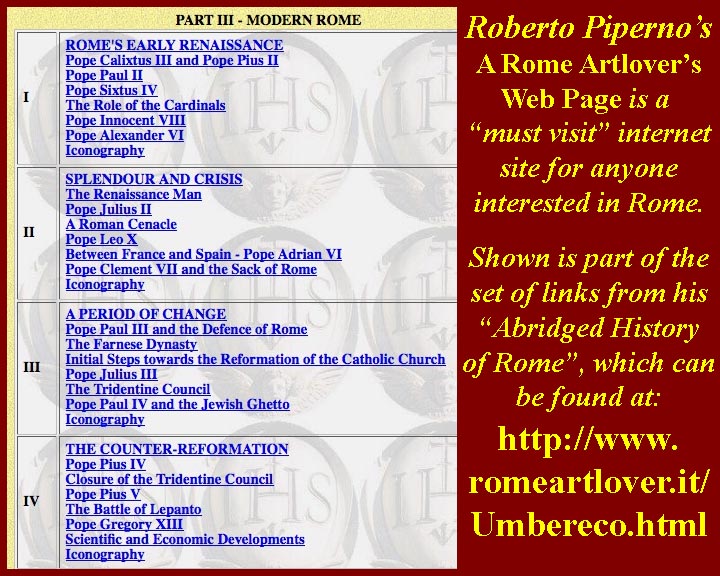 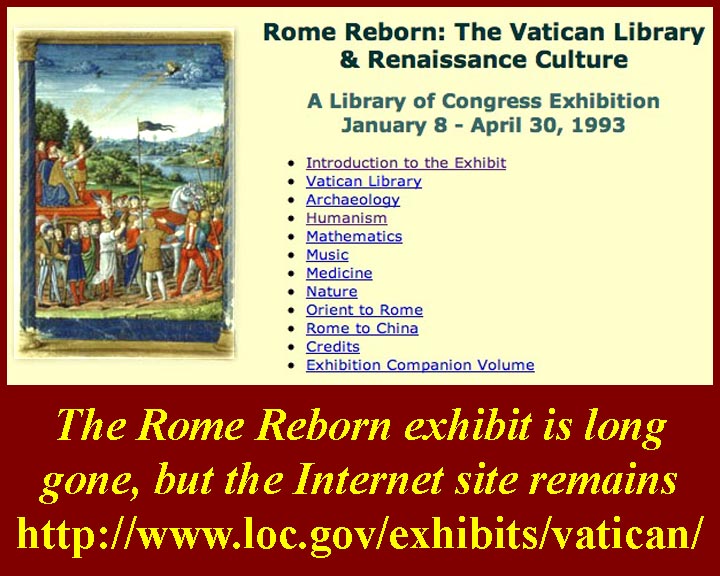 http://www.mmdtkw.org/RenRom0910f-RomeReborn.jpg
The 1993 Vatican Library / US Library of Congress exhibition Rome Reborn is long gone, but, thankfully, its Internet site is still on line.  Look for it at http://www.loc.gov/exhibits/vatican/. 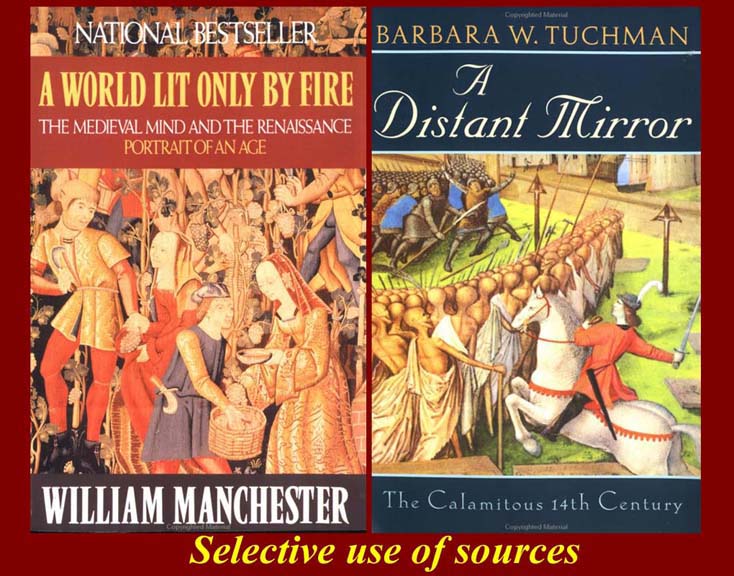 http://www.mmdtkw.org/RenRom0911-SelectiveSources.jpg
Some authors, especially "best sellers", use sources selectively to confirm theses that will sell books.  We can sometimes suspect anti-Papal and anti-Catholic motives, at least in the buyers if not in the authors. 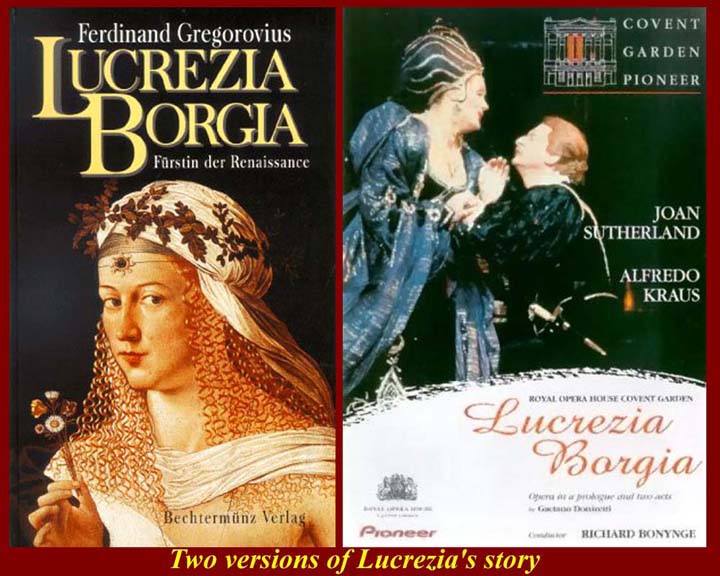 http://www.mmdtkw.org/RenRom0912-VersionsLucrezia.jpg
There are often multiple versions of Renaissance history.  Gaetano Donizetti's opera, Lucrezia Borgia, is an adaptation of the Victor Hugo version of Borgia "history" as drawn from extremely biased and, therefore, highly questionable accounts of Tomasso Tomassi and Stefano Infesurra.  For the Libretto of Donizetti's opera (in Italian), see  http://opera.stanford.edu/Donizetti/LucreziaBorgia/libretto.html.  C.f., https://en.wikipedia.org/wiki/Category:Cultural_depictions_of_Lucrezia_Borgia. 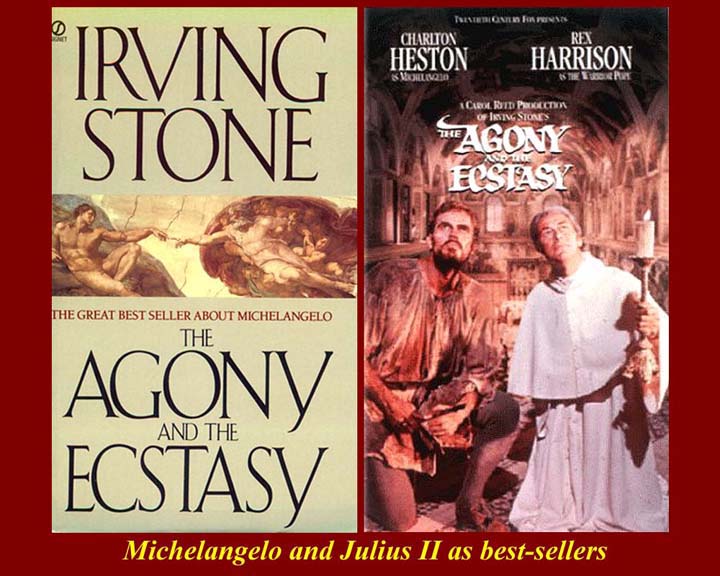 http://www.mmdtkw.org/RenRom0913-AgonyEctasy.jpg
Irving Stone's best selling The Agony and the Ecstasy just scratched the surface of the long and complex relationship between Michelangelo and Julius II, but he did as good a job as could be expected -- no single volume could contain it all.  It made many mistakes concerning the actual installation of the Sistine Chapel ceiling frescoes.  The movie, a great commercial success, was even less able to encompass the story.  And no one will ever convince me that Pope Julius sounded like Rex Harrison. 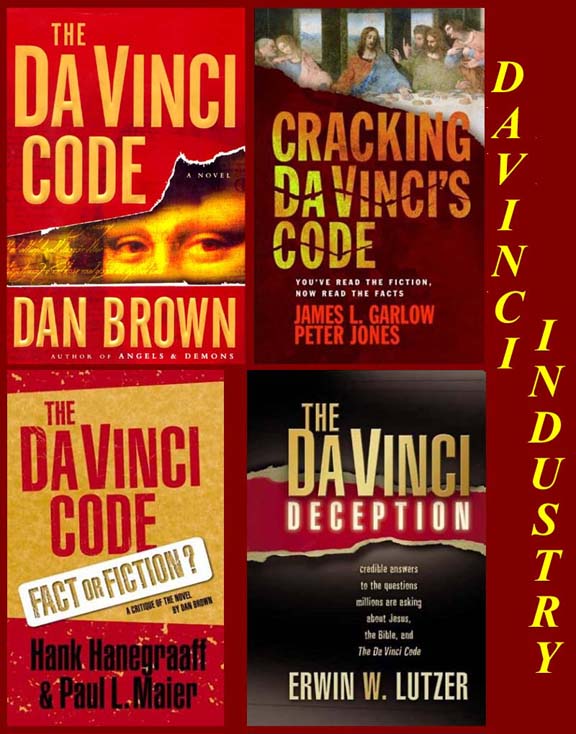 http://www.mmdtkw.org/RenRom0914-DaVinciIndustry.jpg
Today's prime example of misplaced trust in a fictional account that pretends to be based on fact is The Da Vinci Code.  It has spawned a whole industry devoted to debunking or defending/explaining the book. 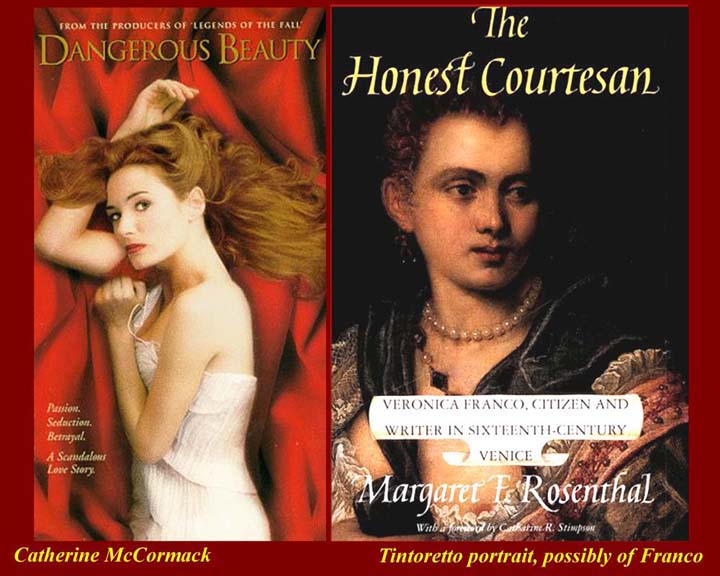 http://www.mmdtkw.org/RenRom0915-DangerousFranco.jpg
It's probably possible to make a movie that accurately reflects legitimate historical research, but, if you know of any, please let me know.  There are sometimes also questions about the legitimacy of the original research, on which a film might be based, if the research is done in highly specialized ethnic or sexist academic programs.