Caius Maecenas (Pronunciation: mis-AY´-nus): In some of the many depictions of the Emperor Octavian (Caesar Augustus) you can see, in the background, a bald man with a very broad forehead. That was Octavian's trusted advisor and friend, Caius Maecenas. He was born into a wealthy Roman family around 70 BC and was in Octavian's entourage even before Octavian achieved sole power by defeating Marc Antony in 31 BC. According to some sources, it was Maecenas who convinced Octavian to eschew titles and the trappings of authority, something that certainly endeared Octavian to the Senate and people of Rome and probably prolonged his rule. After an early career as one of Octavian's personal emissaries and negotiators, Maecenas retired and devoted all of his time to patronage and promotion of the arts, and particularly literature. Horace, Vergil, and Propertius and many lesser authors and poets received financial, political, and moral support from Maecenas.

Maecenas' insistence on expressive freedom for his circle of artists and authors (and a romored liaison  between Octavian and Terentia, the wife of Maecenas) eventually led to some strain in the relationship of Maecenas with Octavian, but he always retained the respect and trust of the emperor. Maecenas died in 8 BC, about halfway through the long reign of Octavian, and, in the final account, Maecenas showed that he reciprocated Octavian's respect by bequeathing to Octavian all of his considerable wealth, including a grand villa on the Esquiline Hill where, in a specially built auditorium, members of the circle had entertained their friend and patron, Maecenas, and his guests.

Maecenas was the archetype of wealthy, generous patrons of the arts, and his name is still memorialized in numerous organizations and events that patronize the arts (the Pittsburgh Opera, for example, has an annual "Maecenas" fund raiser). There are also several "Maecenas" prizes for artistic and literary excellence. Not incidentally, one of the best Internet sites to find photographs of ancient Roman art and architecture is also named after Maecenas. 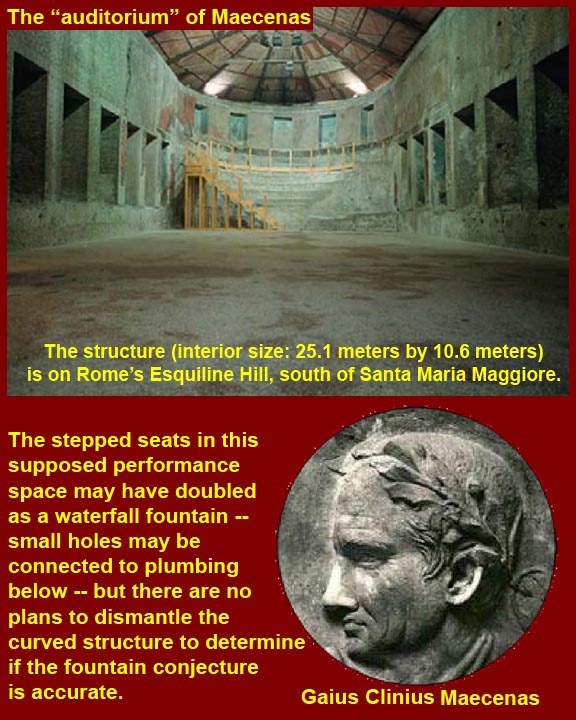 PS -- Maecenas' villa on the Esquiline was remodeled into the baths of Titus and was eventually incorporated into Nero's Domus Aurea.

Also included in Maecenas' will to Octavian was another sumptuous villa in Tibur (today Tivoli), where Maecenas entertained during the hot summer months.

The Wikipedia entry for Maecenas, derived from the famous 1911 Encyclopedia Britannica, is at http://en.wikipedia.org/wiki/Maecenas.

The Maecenas photo collection by Leo C. Curran, mentioned in the text above: http://wings.buffalo.edu/AandL/Maecenas/index.html